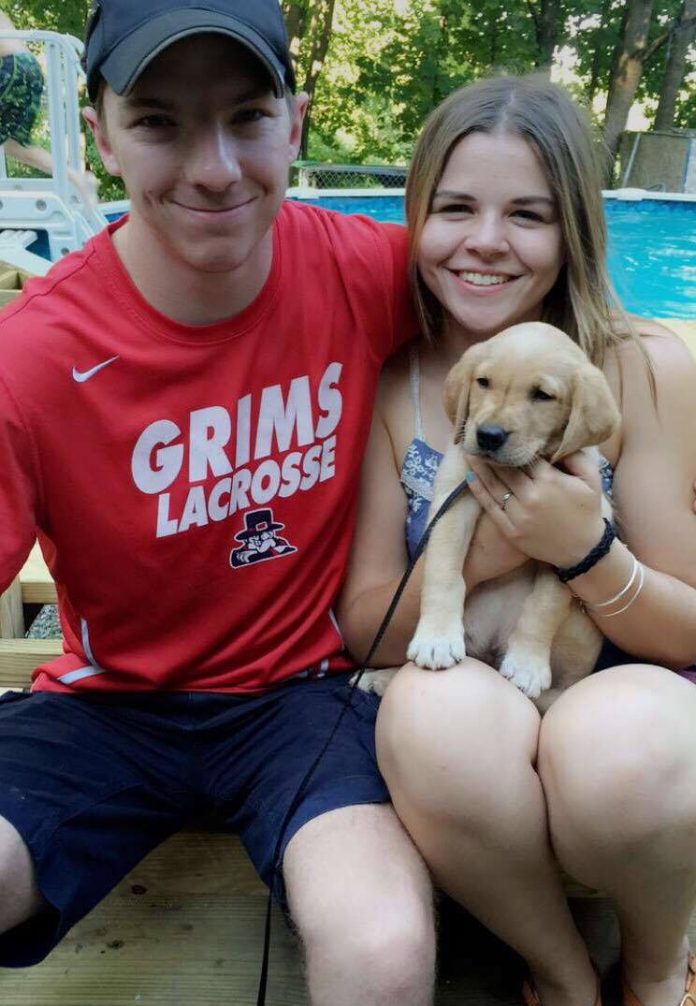 Some common animal sightings on campus have always been squirrels, chipmunks, and the occasional skunk (if you’re unlucky). But this semester there’s a new face in town—one that’s furry, golden, and adorable. New England College, meet Indy, Diabetic Service Dog in training.

Senior Criminal Justice Major Collin Wright and Elementary Education Major Emily Reale are currently training the 15-month-old English yellow lab to recognize and alert to when a person’s blood sugar drops. This training is extensive, and right now they are working on basic obedience.

After basic obedience, they move on to scent training, which involves using a cotton swab sample of saliva from a person with low blood sugar and teaching Indy to associate it with food, later training him to locate the scent when it is hidden on the body.

Indy is the first service dog Wright has trained, but Wright’s mother has been training dogs off and on for a long time. Currently, Wright’s mother is training Indy’s brother to also be a Diabetic Service Dog, but in the past she has trained seeing-eye dogs, hunting dogs, and search and rescue dogs.

It may seem strange to have a dog on campus when animals are not allowed in the dorms, but service animals are an exception to the rule, even training service animals. According to the Americans with Disabilities Act, service animals are defined as “dogs that are individually trained to do work or perform tasks for a person with a disability.” While Wright and Reale live off campus, they would still be able to have Indy were they to decide to move on campus.

NEC has been very receptive to Indy, but one thing both Wright and Reale want people to remember is when Indy’s in his vest, he’s working.

“When he’s in his vest, I would appreciate them doing their best to ignore him. He needs to understand that when he’s working, he can’t just go up and play with anyone,” said Wright.

“He needs to realize that when he has his vest on it’s like an alter ego,” Reale continued, “like he’s a superhero; he can’t be touched.”

Initially they had the most problems with the younger classes, who didn’t know Wright, Reale, or Indy and the importance of what they’re doing; however, as Indy is seen more and more on campus, students are becoming more understanding.

Wright thinks of it this way: “These diabetic alert dogs go to younger children that can’t feel when these [blood sugar] lows happen, so if you get a five or six year old with a full-grown Labrador, 65-70 pounds, and they want to go running up to the first person they see, that dog’s going to pull that child.”

The two try to take Indy for at least four walks a day–two in the vest and two out, so that people can have the opportunity to interact with him and he can get the socialization a growing puppy needs.

Indy will live with Wright and Reale full time until next summer, when he will return to River’s Edge Dog Academy in Texas and complete his training. The subject is a melancholy one, but both Wright and Reale understand that the step is a necessary one for Indy’s success.

“We try to think of it like this: we love him very much, but he’s like our foster child,” Reale said. “Right now we’re not his parents, but we’re raising him to be ready for his family. To have him go through all this hard work and then keep him, it would just be selfish of us. We could never do that.”

Training Indy isn’t easy, they said, and requires a lot of patience, especially considering all his command training needs to be done without treats so as not to disrupt the scent training that will occur later on.

“It’s not easy, it really takes a village, not just him and me,” said Reale. “It’s the whole community, really, understanding and showing support for us.”

Despite its challenges, both plan to continue training dogs in the future, but for now are happy that Indy is a part of their lives, and that his presence on campus is bringing awareness to the importance of service dogs.

Keep a look out for Indy on campus, but remember: If the vest is on, don’t pet him and always ask first!