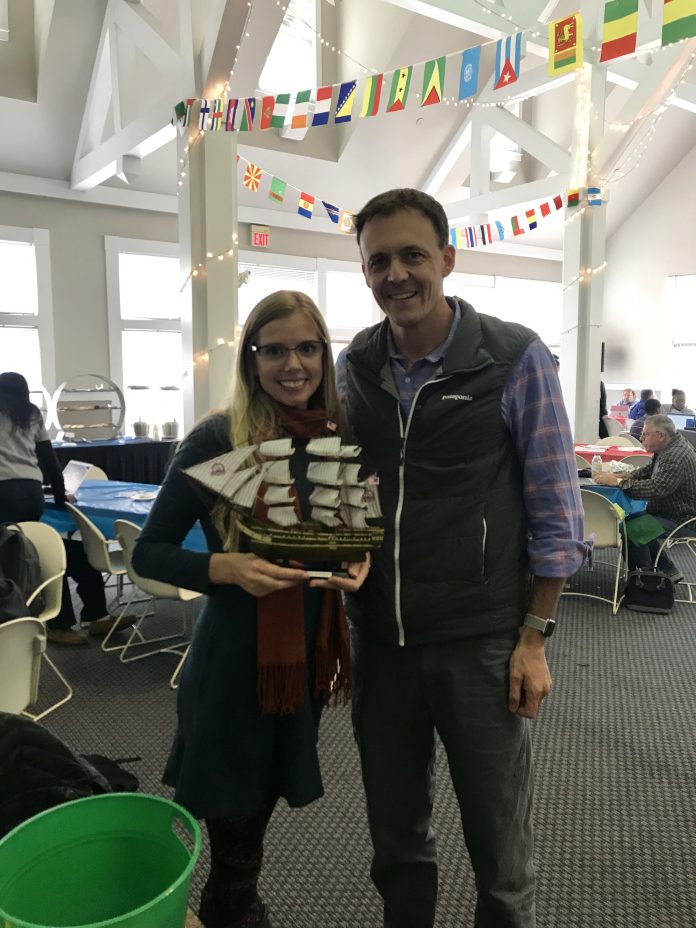 Walking through campus on any fall or spring afternoon, you might get a waft of the smell of freshly cooking hot dogs. Following this smell through the natural landscape of our campus would probably lead to a group of students huddled around a small mobile grill. As you approach the grill, the crowd clears and there’s hot dogs and an array of other foods. Choices for all pallets. Behind the grill stands one man. A professor? Yep, that professor is Bryan Partridge.

Bryan Partridge teaches composition to new students as well as a number of other writing classes and trip classes which require travel. He also mentors first years in the “Bridges to Learning” class, transitioning students just out of high school to their new college life. Partridge has been at NEC a number of years and has watched it grow and change, but he wasn’t always set on this path. He first came to campus through a professor friend who introduced him to the school’s brand new mentoring program. “You could say I was the original mentor,” Partridge laughed as he recalled it. Before then, he was hiking and backpacking around New Zealand, where he moved to after high school with his friends.

Partridge came to NEC because of this mentoring program, but also because of the NEC atmosphere. Partridge cherishes the small but close knit community, saying it’s “full of really good people and the autonomy and freedom to teach how you want.” He also loves the ability to really get to know his students on a deep and personal level.

Sorbrina Vilsain, a junior, recalls taking one of professor Partridge’s classes as a freshman. She said going in, “Truly before I went into Bryan’s class, I used to despise writing to the point that I wanted nothing to do with it because I was told as a high school student that I was a horrible writer.” Vilsain went on to recall meeting Professor Partridge. “Bryan taught me that each individual person has their own style and way when it comes to writing and other things. So I want to say thank you to Bryan for making me able to enjoy writing again and I recommend every new freshmen to take his class.”

When asked to describe himself in three words, Partridge said he would choose immature, adventurous, and fun. He chose immature because he believes that people take themselves far too seriously. Originally looking to be an elementary school teacher, Partridge believes that you can grow up too quickly and it’s best to live life almost like a cosmic joke. This also ties into his choice of the word fun. Partridge chose adventurous to capture his sense of absolute wanderlust. Partridge loves travel and believes everyone at some point should experience life through another lens.

Partridge is currently engaged in a travel competition with Professor Eric Simon to see who can go to the most countries. So far, Partridge is at 28 countries. He believes in the power of travel and taking students to their “uncomfort” zone. Partridge organizes a number of trips for students to achieve this goal. The next trip he will be running is to the Galapagos Islands; students will be thrust into a new environment without the usually luxuries such as cell phones or internet. The next place on his list is Patagonia in Chile because of the mountain views and his love of hiking and being outdoors. He hopes to someday return to Thailand where he island-hopped with his wife.

When asked to give some random facts about himself Partridge said he is a die-hard Detroit sports fan (for better or worse), sings a lot and doesn’t care who hears, and has been to every continent before. He also grew a foot in a year in high school (from 5’2” to 6’2”) and had two freshman years, but it never slowed him down. He also said his favorite color is blue, hands down.

On campus, NEC faculty and staff share among each other the One Ship Award. Megan Hotaling, a previous recipient of the award and a prominent member on campus, passed it on to Partridge in early November, who would later pass it on to Kelly Holmes. Megan Hotaling had this to say about Partridge, “He takes the time to connect with his colleagues, and I have a deep respect for the quality of his work at NEC. His sense of humor and personality make him fun to be around, which makes any day at work better!” Hotaling also stated that Partridge is a fantastic member of the NEC community and wants the best for his students so that they may succeed.

Partridge recalled a childhood memory during my time with him, remembering the time he pitched a no hitter at age 13. Partridge said he had no idea it was a perfect game until the team told him after he threw the last pitch. He still has that baseball today and thinks of it fondly.

Partridge also thinks that people should take more time to think about who they are and figure out what they want from life. He believes that people should live the life they want to live and have genuine conversations with others. Promoting real talking is a goal for Partridge. His biggest wish is not for world peace as that would be too cliché. Instead, he wishes that everyone was happy. “World peace doesn’t necessarily mean world happiness. I’d wish for widespread happiness.”

Bryan Partridge is a father of two girls and a dog. Thoughts of his children’s safety keep him up at night. He wishes for their safety, happiness and protection from this age of social media where bullying and losing yourself has become commonplace. Partridge has been known to take his daughters to school with him as well as his dog, who is loved by almost everyone in his classes. When they don’t come to school they are a part of his morning ritual, which involves putting them on the bus, working out, and driving an hour to our campus.

Partridge said his favorite part about coming to work was that the essence of NEC has stayed constant throughout the years. NEC is still recognizable to its alumni and is still very much a home to them. Partridge recalls visiting his old college and being impressed with the development, but very disappointed with the lack of familiarity he had with it. “Sure, some of the old dorm buildings were there, but everything else was new or different. It changed too much and didn’t keep any of its homey-ness for me.”

Bryan Partridge is a beloved member of the NEC community by his students, both current and former, as well as faculty and staff. If there is ever a friend that everyone on campus should have in common, many people will say it’s safe to say Bryan is your man.