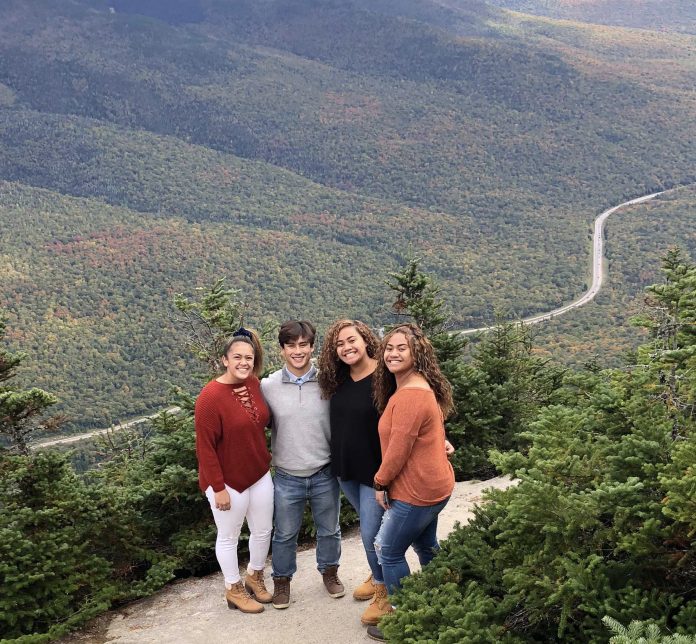 When most students go to college they have to weigh many options. Will the school fit their budget? Can they drive home for winter break? Do they have any friends attending? One thing students don’t have to debate is: will their culture be completely turned upside down if they go here?

The four Hawaiian freshmen that have decided to attend New England College this fall have had to think about this daunting question. After being recruited by multiple sports teams at New England College, Gianni Oyadomari, Tihani Ehia, Jessica Ostrov, and Julia Ostrov all decided to take a leap of faith and attend school an ocean away from their home, Oahu, Hawaii.

Gianni comes to NEC from Kapolei, Hawai’i for wrestling. NEC also worked out for him best financially. So far, he has enjoyed making friends on and off the wrestling team. On the opposite end, he has disliked some of the things he hears about Hawai’i. He says that “sometimes people try to be funny or are just very uneducated” and it makes him frustrated.

A Hawaiian upbringing means having a tight-knit relationship with family. Being more than 5,000 miles away from home was a huge change for all of NEC’s new Hawaiian students. Gianni says that most of all, he misses the cooking from back home and his siblings, “especially [his] younger ones.” He has found it easy to adapt to a non-Hawaiian culture simply because he has had Tihani Ehia, Jessica Ostrov, and Julia Ostrov who “brought the culture up here with them.”

Julia had some of the same opinions on coming to NEC, but her and her sister come to New Hampshire for volleyball and to continue their educations. Julia says that her team has made the transition to college smooth because she has found so many new friends in the process.

As anyone can expect, the weather has been a challenge for these Hawai’i natives. The constantly changing temperatures have made it hard for Julia to adapt to the different climate that the northeast brings to the table. Just like Gianni, Julia and Jessica’s family played a strong role in their decision to attend NEC.

“[My family] has allowed me and encouraged me to experience a whole new life. I am so grateful,” said Julia when asked if her family has been supportive of her decision to attend college so far from home.

Tihani had a lot to say. “It is quite hard being from Hawaii and getting off the islands or even getting recruited,” said Tihani when asked what brings her to NEC. She, just like Julia and Jessica, play for the Pilgrims volleyball team, and Tihani has enjoyed meeting new people on the team and making new friends.

Tihani made it clear that distance isn’t the only factor that makes it hard to cope with being far from home. She says that it’s the “hospitality” that makes it hardest for her to be away from family. Ehia, when asked about getting used to being away from family, said, “There is no one up here who shows me love and compassion like they do.” She noticed that everyone she has met is completely different than how people are back home in Hawai’i.

Tihani explained that “In Hawai’i, you respect everyone, no matter who they are.” She went on to say that in Henniker, the same respect is only given once you know someone and have developed a relationship with them, instead of right off the bat.

Unlike the twins and Gianni, Tihani’s family wasn’t all supportive. “At first I had a lot of my family trying to convince me not to go,” Ehia said. But, by the time it came down to Tihani making the decision to go far or stay close to home, her family flooded her with support, wanting her to be able to make it out of Hawaii, something that most people don’t do.

One thing all these four have in common is answering everyone’s questions. Hawaii isn’t beaches and sunshine all the time. Tihani, Gianni, Jessica, and Julia all know that every ones questions about being from the beautiful Hawaiian island come from a good place. But, the next time you ask them a question, think about all the things you dislike about your home town, because chances are, they feel the same way about theirs.