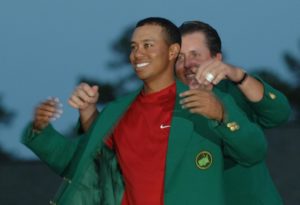 Tiger Woods is the biggest name in golf. He moves the needle. Since his latest return from injury, golf has been buzzing. In 2018, Tiger played some of the best golf that he has played in over 5 years. Through scandals and injury, Tiger seems to have finally bounced back. Many people are hoping that he will soon be returning to his old form.

With a solo second place finish at the PGA and a close call T6 at the Open Championship last year, fans are hopeful, especially after Tiger closed the year with a win at the tour championship in September. Just last week, at the Dell Technologies match play in Texas, Tiger took down one of the world’s best golfers, Rory Mcilroy, head-to-head before falling to Luke Bjerrgaard later that same afternoon. The Big Cat is playing some good golf, and now with April right around the corner, that means one thing.

The Masters tournament, in Augusta, GA, is widely considered golf’s best major, and the only major that is played at the same golf course every single year. Tiger has won a stunning four times at The Masters during his professional career. It is also where Tiger won his very first major in 1997, at a record setting 18-under par, a whole 12 strokes below the 2nd place finisher.

Last year, Tiger finished with an underwhelming tie for 32nd at Augusta.  The good news, however, is that Tiger finished on Sunday with a strong showing at 3-under par in a round where it felt like he played better than he scored. Tiger’s struggles in 2018 had a lot to do with his inaccuracy off the tee, but now he is playing with a new shaft in his driver and his driving has improved greatly.

This year, Tiger is considered to be a favorite at 14-1 odds according to CBSSports.com. He has an impressive resume at Augusta, and it is a course that he enjoys playing. He has always been able to elevate his game in big moments, and there is arguably no bigger stage in golf than The Masters. The second week in April provides the opportunity for Tiger Woods to put on his fifth green jacket and shake the golf world to its core.

Can Tiger get it done?

The Crime of Being a Woman Athlete