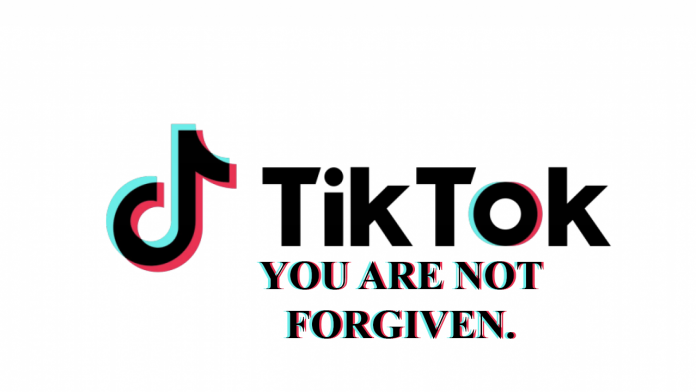 In Response to The Response,

I was hoping that by the time a response surfaced to the TikTok article, this situation could be put to rest. But, unfortunately, I am forced to address it once again, as my personal integrity has been put into question.

“Since the article has been posted, it was brought to our attention that the author of the article posted on a social media account of their own that when they first addressed us, we had threatened them, which simply is not true.”

Simply not true. After I posted a comment under the original video, I received two messages at roughly the same time. One was from the original poster, and one from another individual, who was very clearly working in tandem with the poster at the time. 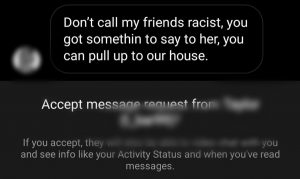 I will admit that this message never outright alludes to any harm that will come to my person. However, based on the colloquial meaning of the phrase “pull up,” what is implied is; “Do not call my friend racist or a physical altercation will be the result.”

This is a veiled threat.

“When they first addressed us, we immediately took the video down and messaged them to let them know that. We did this because we did not want anyone offended or hurt by what we believed was an innocent, harmless and kind gesture for our friend and her boyfriend. This is just one false statement out of the many that have been made regarding the situation.” 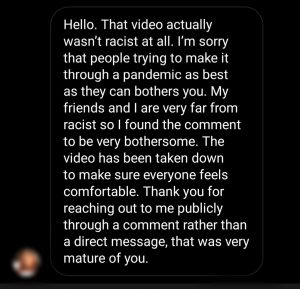 The above is a message I received from the original poster at roughly the same time that I received the threat. It is true that at this time the video was removed but it is also true that the poster took this as an opportunity to insult me and to make sure it was known that she was not sorry.

“On multiple occasions we’ve also tried to connect with the author to introduce ourselves, discuss the situation, and come to a mutual understanding of how this incident evolved and bring it to a respectful conclusion.”

The following are the kind of “connecting” I have received:

Note that the comments shown were posted under false names…my name actually, so I do not know for certain that the posters were the same as those involved in the Tiktok, but my common sense leads me to believe they were involved. 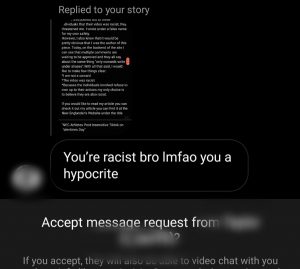 After being harassed it became obvious to me that they did not want to have a civilized conversation about the issue at hand, they wanted to act like grade school mean girls in order to intimidate me into silence. I will not have that. I decline to meet with these individuals.

These individuals did not address the bulk of the issues I, and the community, had with their video. I implore anyone to show me a Chinese food restaurant where the menus are written in broken English and where the employees dance at the table for you. I implore these individuals to explain away the sentence “tank yew, peas come back in 15 minutes for pork fried wice,” or to break down the “authenticity” of the dance that was performed.

These individuals aren’t sorry, and I do not accept their apology, nor am I in any position to do so. At the end of the day this upset people, including friends of mine. Your good intentions aside, my friends deserve an apology for your actions, as does everyone else on this campus, not another excuse.

I condemn the behavior of these individuals and I encourage my peers to speak out when they see unacceptable behavior on campus; otherwise, nothing will change.