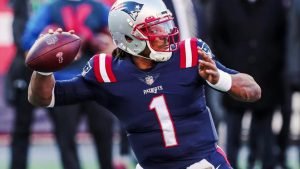 Over the years, Patriots fans have gotten used to Bill Belichick letting stars walk and electing to sign cheap free agents instead. Belichick is the master of finding players no other team wants, signing them to inexpensive contracts, and making them shine in New England. His frugal spending and keen eye for talent have both been key reasons to why the Patriots have won six Super Bowls over the last 20 seasons and have been to nine in total. However, perhaps the biggest key to the Patriots success during that period, is no longer a part of the picture. That would be Tom Brady, who just won the Super Bowl with the Tampa Bay Buccaneers in his first season since leaving New England. The argument has been made that Brady helped the Patriots cover many shortcomings over the years. That argument was validated this past season, as Brady won the Super Bowl and the Patriots went 7-9, missing the playoffs for the first time since 2008.

It didn’t help that the Patriots were left with nearly no cap space last season and weren’t able to sign any stars, even if they wanted to. This year, however, is a different story. The Patriots entered free agency with the third-most cap space of any team in the NFL and would have the opportunity to spend aggressively. But after two decades of conservative spending strategies, the question remained: Would they? That question was answered immediately. After re-signing QB Cam Newton, DB and special teams stud Justin Bethel, DL Deatrich Wise Jr., and DL Carl Davis, it was time to look outside of New England to acquire some much-needed talent. They did so immediately and with urgency. Here are some of their key acquisitions:

The Patriots’ first move was not a free agent signing, but a trade to acquire former Raiders offensive tackle, Trent Brown. He was a key part of New England’s offensive line during their 2018 Super Bowl run and will provide size and depth to an offensive line that suffered from injuries at times last season. Reuniting with Brown makes sense because of their familiarity with his game, plus his proven ability as a blocker. Brown signed a long-term deal with the Raiders, but will re-structure his contract to once again play for the Patriots. This addition makes the departure of Joe Thuney, who signed an $80 million deal with the Chiefs, less of a blow.

The first major free agency splurge the Patriots made was to sign Jonnu Smith, arguably the second-best tight end on the 2021 free agent market. This was an eye-popping contract for New England to offer, but it shows that they are looking to re-emerge as serious contenders this year and surround Cam Newton with weapons that he lacked last season. Smith hasn’t had a truly dominant season during his career with the Titans, but the four year veteran is only 25 years old and is coming off his best year. He showed versatility this past season as both a blocking and receiving tight end, finding the end zone eight times as a receiver.

Just a few years removed from helping the Eagles beat the Patriots in the 2017 Super Bowl, Jalen Mills is signing with New England. According to ESPN’s Mike Reiss, Mills is the only player in the NFL who played 50 or more snaps at each of the following positions last season: left & right outside linebacker, left & right slot cornerback, left & right wide cornerback, and free safety. This kind of versatility will win coaches over quickly. By signing Mills, Belichick has instantly added depth and flexibility to his defense.

This is a huge contract for the Patriots to give out, but Judon is a proven linebacker who will provide a much needed pass rush for the Patriots. New England’s defense looked strong at times last year, but a lack of consistency from pass rushers hindered their potential. The signing of Matthew Judon should change this. His stats have been consistent over the first five seasons of his career and he has accumulated 34.5 sacks during that time. The Patriots are hoping Judon is a monster on defense and lives up to this contract.

During his time with the Eagles, Agholor became notorious for dropped passes and was eventually let go. The Raiders picked him up on an inexpensive contract last year to add depth, but Agholor ended up rejuvenating his career and becoming one of the Raiders’ best receivers. He became a dangerous deep-ball threat, catching 48 passes for 896 yards (18.7 yards per catch), as well as eight touchdowns. A deep-ball threat is something the Patriots have lacked for the last couple of years. The signing of Agholor should solve this issue. The question now becomes whether or not Cam Newton will be able to find him down the field.

Kendrick Bourne, originally an undrafted rookie out of Eastern Washington, has enjoyed a solid start to his career. He is the youngest player out of any of the Patriots’ free agent signings, just 25 years old, and has tremendous upside. Bourne hasn’t proven himself to be a solid number one option so far, but he is coming off a career year in which he caught 49 passes for 667 yards and two touchdowns. A receiving core riddled with injuries and disappointing performances last year is quickly becoming one of the deepest in the league.

This deal is the icing on the cake. I am giddy just thinking about the possibilities for next year. When the Patriots signed Jonnu Smith, the second-best tight end on the free agent market, it was a very promising start to free agency and Patriots’ nation was happy. But in the back of their minds, maybe they wished Hunter Henry, the top tight end of free agency, had signed instead. Well, now they have both! Henry is coming off his fourth NFL season and is likely to be entering his prime years, as he is only 26 years old. He has been a consistent option for the Chargers throughout the early part of his career and was a coveted member of this year’s free agent class. New England will now be able to return to a two-tight end set, which Belichick has used successfully during his years in Foxborough. This move was pleasantly shocking and capped off a thrilling first couple days of Belichick’s aggressive pursuit of talent.

Bill is spending that CASH and looking to make New England a contender again. That being said, the work is not done. There is now plenty of talent in New England, but there are loose ends to tie up. Fortunately, many of those missing pieces can be found right here in New England, but Belichick will need to make the right offer to keep them around. One is center David Andrews, a team leader and captain, who could be the final puzzle piece to complete a dominant offensive line. He has been a consistent contributor and has endeared himself to his teammates, making him a solid long-term investment. The other key member is the versatile running back and three-time Super Bowl champion James White, who is a heart and soul type of player and brings a much needed skillset to the Patriots’ backfield. Last but not least, bring back Nick Folk, who was easily last year’s team MVP and emerged as one of the league’s most reliable kickers.

If the Patriots can get competent play out of their quarterbacks and avoid injuries, I believe they could once again be contenders. September can’t come fast enough.

The Fans are Back