Picture, if you will, two of the greatest wrestlers to ever step foot in a ring. Now, picture the eight year old son of one of these men being thrust into a storyline where he is told his dad is not actually his dad.

Well, back in 2005 Eddie Guerrero and Rey Mysterio put on one of the most convincing yet bizarre storylines in WWE history where the story was just that.

Early on in May of that year, Eddie Guerrero and Rey Mysterio were on top of their game as a tag team. They were the reigning champions on the SmackDown brand, but their friendship slowly began to dissolve. The first instance being Rey Mysterio’s chance at earning a shot at the WWE Championship.

Rey Mysterio was slated to fight JBL in a #1 contender’s match for the WWE Championship. During the match, JBL’s associate, Orlando Jordan, would interfere several times. This would provoke Guerrero to come out and even the odds by attacking Jordan, ensuring there would be no more interfering. As Guerrero celebrated his successful attack, JBL would kick Guerrero from behind. This distraction would allow Mysterio his finishing move, the 619.

As Mysterio went for the pin, Guerrero would enter the ring, pull Mysterio off of JBL at the count of two and attack JBL, resulting in a win for JBL as this immediately disqualified Mysterio.

The following week, a similar situation would arise. This time, Eddie Guerrero had a #1 contenders match against Kurt Angle, winner would go on to face JBL to see who would face John Cena at Wrestlemania in a WWE Championship match. During the match, Kurt Angle would Ankle Lock Guerrero. To escape it, Guerrero would kick Angle off of him which sent Angle flying right into the referee, sending the ref over the top rope. With the referee knocked out, Kurt Angle would go to ringside and pick up a steel chair. However, Rey Mysterio would come out and attack Angle before he could use the chair on Eddie.

Mysterio would then pick up the chair and approach Eddie, who misread the situation and thought Mysterio was going to attack him with the chair as opposed to helping him as Mysterio intended to do. As Mysterio would try and explain to Eddie his actual intention, Angle would sneak up behind Mysterio and push him, chair first into Eddie Guerrero. This would knock both Mysterio and Guerrero out. This gave Angle the opportunity to pin Eddie Guerrero and defeat him in the match.

The partnership would begin to dissolve even more in the coming weeks. The week after Eddie faced Angle in the #1 Contender’s match, Guerrero and Mysterio were to defend their Tag Team Titles against Joey Mercury and Johnny Nitro (also known as MNM as they were also accompanied by Melina). Eddie and Rey would then lose their titles to MNM. They would also be unsuccessful at defeating MNM the following week in a rematch for the titles after Eddie Guerrero would let MNM double team on Mysterio and would refuse to let Rey get in a tag.

This would lead to a series of matches between Mysterio and Guerrero. The first of which would be at Judgement Day where Guerrero would allow himself to get disqualified by attacking Mysterio with a steel chair. They would then fight on an episode of SmackDown, where Rey Mysterio would successfully defeat Eddie Guerrero. Following this match, Eddie Guerrero let it slip that he knew the truth about Rey Mysterio, and he was going to have Rey beg him. He would then come out to the ring and play footage of himself at Rey Mysterio’s son Dominik’s daycare. He would ask Dominik if he liked secrets and bedtime stories, and then told him that he would tell him a bedtime story he would never forget.

Rey Mysterio would then come out the ring and Eddie would make him beg not to let out the secret he had about Dominik. Eddie would then spend weeks teasing this dirty little secret he had. Eddie’s own family would even appear and beg him to drop it, which would only infuriate him even further, causing him to lash out at his wife and kids. He would later apologize to his wife and challenge Rey to a match at the Great American Bash.

The stipulation would be, if Rey Mysterio could beat him, he would keep quiet about the secret, however if Eddie were to wine, he’d let it loose.

Rey Mysterio would ultimately defeat Eddie Guerrero again, for the sixth time in his career. Despite having promised not to reveal the secret, Eddie Guerrero would come out two weeks after the match and address the situation by pulling out a book called “Eddie’s Bedtime Stories.” The story he told was of a time when he and his wife were separated, he was partying too much and accidentally impregnated another woman. He and the women wanted nothing to do with the baby so he had an idea. Remembering that Rey Mysterio and his wife were struggling to have a child, when Eddie’s son was born, he gave his child to Mysterio to raise as his own. The child’s name… was Dominik. However, Eddie claimed that they never signed any adoption papers.

The following week, Eddie came out to “read” chapter two of his bedtime stories, which ended up just being Eddie demanding custody of his son. He followed up with chapter three of his bedtime stories the following week. Eddie would make his way to the ring with a social service worker. He demanded that Rey Mysterio and his wife Angie bring out “my son Dominik”. Mysterio and his wife would then come out with Dominik. Eddie would get down on one knee and ask Dominik to come towards him. Eddie would then ask the social worker to “do your job and give me my son.” The social worker would stand there and refuse to intervene.

Rey Mysterio goes on to say that Eddie can never beat him, that he can win in a court of law, but he’ll never beat him in the ring. He says that when Eddie finally gets into the hall of fame, it’ll say “Eddie never beat Rey Mysterio” and if Eddie were to take Dominik, Dominik would always know that Eddie was never the man Mysterio was, he was never the wrestler Mysterio was, and that the only thing he would know was that “Eddie Guerrero was a chicken shit.”

Eddie would say that the only “chicken shit” around was Mysterio. Mysterio says “Prove that you can beat me. Face to face one more time at SummerSlam. Eddie Guerrero vs Rey Mysterio for the custody of Dominik.” Thus, the “Custody of Dominick” ladder match would be set for SummerSlam. Dominick would be placed into foster care until the August 21st Pay-Per-View.

For the seventh time in his career, Rey Mysterio would beat Eddie Guerrero at Summerslam, and regain custody of Dominik. 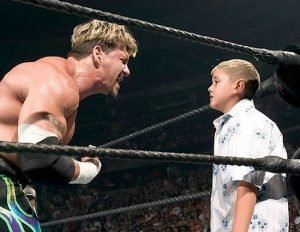 Now, the thing about this storyline is that Eddie Guerrero and Rey Mysterio did a phenomenal job when it came to their acting. It was almost as if they took off their wrestling boots and put on their best telenovela shoes. This storyline looked like it came straight out of Telemundo. It was full of drama, and if it weren’t for the fact that it all culminated in a ladder match for the custody of an actual child, it probably would’ve been an even better storyline.

Nevertheless it was an amazing spectacle that somehow was believable. To this day, Dominick still gets asked if Eddie Guerrero is his father.

Being that this was Eddie Guerrero’s second to last storyline before his passing in November 2005, he made the best of it. He did his absolute best and no matter how stupid it may be, I still believe this was one of the greatest storylines in the history of WWE.