Winter sports are in full swing as they had their first full week of the season, and fall sports truly ended their season, blowing expectations away. Read along for this week’s sports recap.

The New England College men’s soccer team travelled down to Medford, Massachusetts to participate in the first round of the NCAA Division III tournament on Nov. 13, 2021. The team played the two time defending champion, Tufts University, but ended up losing 1-5. Tufts took a 0-1 lead in the first half. In the second half, Tufts scored against themselves, tying it up 1-1. After that, Tufts scored four unanswered goals, winning the game.

After winning their first conference finals in ten years on Oct. 23, 2021, the NEC men’s cross country team took on the East Regional Competition on Saturday, Nov. 13. They sent two runners, Ian Morse and Noah Raz. Morse finished the 8k course in 35:16, while Raz finished in 39:20. 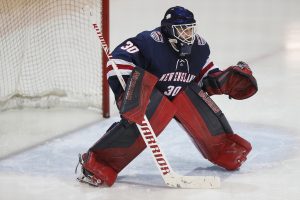 Men’s basketball continued their season, but unfortunately went 0-2 this week, suffering an 84-94 loss to Colby College in overtime and a 94-104 loss to St. Joseph’s College. Women’s basketball went 2-2 this week, losing 30-67 to Husson University, and then winning two straight, beating UMass Boston 56-47 and Thomas 52-38. They could not pull off three in a row, as they lost to UMaine Farmington 57-58 after the opposing team hit a game-winning buzzer beater. Men’s ice hockey piled on in a 6-0 win against Framingham State University, as nine of the NEC players earned points. They won one more against Castleton University 2-1, but then lost against Skidmore College 1-4. Women’s ice hockey struggled to find their first win as they went 0-2 again this week. They suffered a 6-1 loss against Castleton University and a 0-2 loss against Plymouth State University. The wrestling team also took fifth in their meet this past week.

In Boston sports news, the Celtics started off the week hot, beating the Raptors 104-88 and the Bucks 122-113 in overtime, but they blew another 19-point lead in a loss against the Cavaliers. This was the second time the team has done that this season. The Celtics have also engaged with the 76ers in trade talks for Ben Simmons. Reports say the 76ers will only take Jaylen Brown. The Patriots continue a hot streak as they trampled over the Browns this Sunday, Nov. 14. The Patriots won 45-7 and have now won four in a row. Mac Jones finished with 19 completions on 23 attempts for 198 yards with three touchdowns. The Bruins go 3-1 this week, beating the Senators 3-2, losing to the Oilers 3-5, and then winning two straight against the Devils 5-2 and the Canucks 5-2, as well.

In other sports news, two big name free agents were signed in the NFL this past week. Wide receiver, Odell Beckham Jr. was signed by the Rams, and Cam Newton, former quarterback for the Patriots, signed with his another former team of his, the Panthers.

Farewell to our Editor-in-Chief

Women’s Wrestling is a Go for the 2022 Season

Is It Worth It?