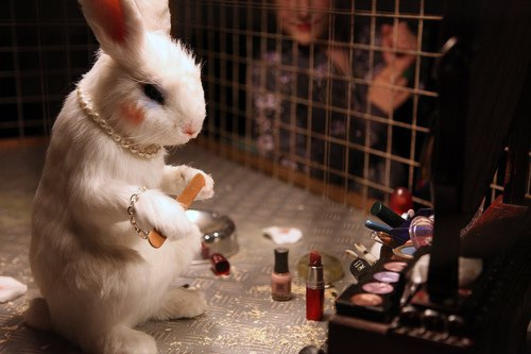 In a society where beauty is wanted and expected from most women, it should come as no surprise that cosmetic sales are on the rise. When the ideal model of “perfection” is clear skin, long, dark lashes, and rosy cheeks, those of us who aren’t blessed with such attributes run—don’t walk—to the nearest drug store. We smear pigmented oils on our face, dyes on our cheeks, and waxes directly to our eyelashes.

After looking at the ingredients listed for any one of these products, one might wonder: is this stuff safe? The answer to that question lies within a lab filled with cages of animals who know no other life than the painful one they lead within the confines of that room—but it doesn’t have to be that way.

While many—including myself—would agree that running cosmetic products through a series of tests before being sold to the masses is absolutely necessary, few are aware that there are cruelty free ways of achieving that. Alternative methods to animal testing are not only more accurate, but are also more cost effective and environmentally friendly.

The number of alternative testing methods are endless, and more in-depth than the average person would guess. Some available methods, according to “In Testing”, include in vitro (test tube) tests, computer simulations, virtual drug tests, and even micro-dosing—a process in which a live human test subject ingests low doses of a particular substance for an extended period of time as only to affect the cellular system without having negative/lasting effects on the rest of the body. These processes don’t just sound cool, either—in one study involving skin irritants, EpiDerm (one of many in vitro tests) correctly identified all of the human skin irritants, while the tests on rabbits could only detect 15 of the 25 chemicals as irritants. That’s a 40% error rate.

If accuracy isn’t your thing, maybe the cost effective aspects will convince you? Synthetic skin can provide results for tests done on chemical corrosivity somewhere between three minutes and four hours, roughly. That may not sound like much, but traditional tests done on animals can take anywhere between two to four weeks to produce results—and more conclusive tests can take upwards of five years per individual substance. Using synthetic skin saves time, money, and a lot of bunnies.

But wait—there’s more! Have you considered what happens to these animals after the tests have been conducted? Most are euthanized once testing has been concluded, and the bodies are disposed of. Pros Versus Cons makes a good point, that this creates an environmental issue when these animals have been exposed to toxicity testing, as their bodies still contain hazardous materials. Now, their toxic carcasses are left to rot in landfills, exposing that area to whatever chemicals they were once pumped with.

Overall, stopping cosmetic animal testing isn’t just a decision of morals—it’s a decision of cost efficiency, environmental concern, and testing effectiveness. The tests we conduct are as good as useless unless we gather real, concrete data about what certain chemicals and products will do to the human body, and we simply can’t do that when we conduct those tests on animals. Furthermore, we have the technology to eliminate the use of animals in product testing, and it has even proven to be faster and cost less than using animals in labs. Lastly, by eliminating the need to dispose of contaminated bodies, we also eliminate the chemicals that are being leaked into the environment. If we stop the use of animal testing and replace it with any of the known alternatives to date, we will save money, gather more accurate results, and lessen damage done to the environment.