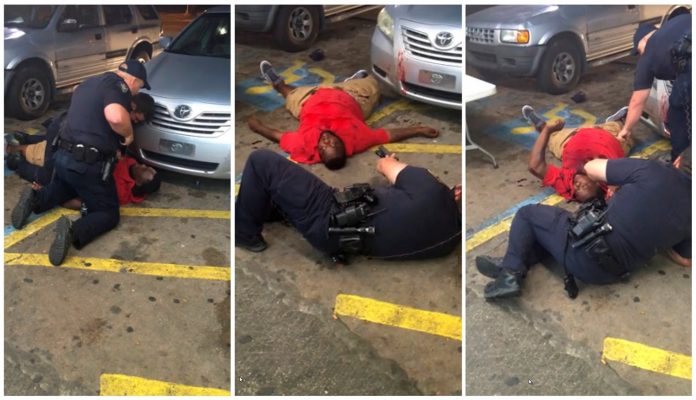 America is no stranger to unjust killings and failed legal systems. But on July 5th, 2016 Alton Sterling, a 37 year old father, was another African American victim added to the list of reckless killings by American cops. He was detained and fatally shot in close range 6 consecutive times.

Officer Howie Lake II, who took part in Sterling’s detainment, was suspended for 3 days, yet Sterling’s killer, former Officer Blane Salamoni,  has been fired but has not served any jail time. While to most of the African-American community the failed legal system is no surprise, the newly released body-cam video has made some noise.

The video of Sterling’s death taking at a gas station in Baton Rouge, Louisiana has gone viral directly despite the tragedy occurring 2 years ago. This video adds to the potential motives and theories as to why Alton’s life was taken that night.

According to a dailybeast.com article, “Salamoni and Lake arrived at the Triple S Convenience Store shortly after midnight on July 5, 2016.” They were responding to a 911 call that said Sterling had waved a weapon towards someone selling bootleg CD’s. The officers immediately engaged Sterling and Salamoni pointed his gun at Sterling’s head. They then continue to explain through dialogue in the video.

“Put your hands in the car or ima shoot you in yo fucking head, you understand?” His gun was inches from the side of Sterling’s head.

“Alright man, hold up, you hurt my arm,” Sterling told him.

After struggling with Sterling, they used an electric stun weapon on him unsuccessfully.

On the ground, the officers struggled to control Sterling. “He’s going for the gun,” Salamoni yelled, and then fired three shots at Sterling.

Eyewitness video of the shooting, obtained by The Daily Beast in 2016, does not show Sterling reaching for his pocket, where the gun was. After the first three shots, Sterling rolled over, and Salamoni shot him three more times in the back. At that point, Sterling stopped moving.

After he stood up, Salamoni waved his gun at Sterling’s prone body. “Stupid motherfucker,” he said, breathing heavily.

It is my opinion Salamoni seemed to have some objective against Sterling that night.

Though the police officer not only shot Sterling 6 times in the chest, he proceeded his search while Alton’s life drifted away. You can see for yourself here.