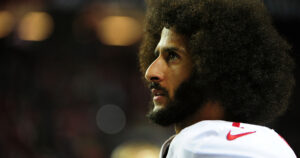 In 2016, Colin Kaepernick made the controversial decision to take a knee during the National Anthem as a form of political protest. His silent, yet powerful, protesting of police brutality in America cost Kaepernick his career as a professional football player for the San Francisco 49ers.

Inadvertently Kaepernick also became a trailblazer for the intersectionality of sports and social justice.

Kaepernick’s activism did not die on the field. He directed his energy toward educating Black and Brown children about their rights through the Know Your Rights Camp (KYRC). Their mission is “to advance the liberation and well-being of Black and Brown communities through education, self-empowerment, mass-mobilization and the creation of new systems that elevate the next generation of change leaders.”

So far, the Know Your Rights Camp has been conducted in cities in Europe and across the United States, including Atlanta, Baltimore, Amsterdam, New Orleans, Chicago, New York City, and Oakland.

Last year, Kaepernick not only announced his impending memoir, which details the events leading up to his protest against systemic oppression, but the start up of his own publishing house. Kaepernick’s aim is to amplify Black voices and the stories they have to share with the world. “By elevating a new generation of writers and creators, we seek to inspire all generations of readers and listeners through the development and publication of meaningful works.”

Kaepernick Publishing does not currently accept submissions, but he will be publishing his memoir through the company.

Currently, Kaepernick Publishing is calling for the abolition of police and prisons and partnering with LEVEL by publishing 30 stories from organizers, political prisoners, scholars, and advocates. Activists are advocating for permanent solutions to police brutality and mass incarceration, which disproportionately and negatively affects Black and Brown communities across the United States. Reform has proven to be an ineffective remedy to these institutional and systemic problems. LEVEL says: “Not only do police and prisons fail to make us safer, but reform has only strengthened their most toxic and ingrained practices.”

Systemic oppression has never died in the United States, reappearing in different forms throughout history. From slavery, to Jim Crow, and now, mass incarceration. The relationship between Black people and BIPOC (Black, Indigenous, and People Of Color) and the police has always been strained. It is time to discuss a future with community based solutions to crime. Just as it is also time to discuss a future without for-profit prisons, which directly benefit from mass incarceration.

A future where being Black is not a cause of death, or a motive for prejudicial sentencing – where Black is not synonymous with guilt.

Back to the Ice: How Men’s and Women’s Ice Hockey are Adjusting

In Response to the Response: You Are Not Forgiven