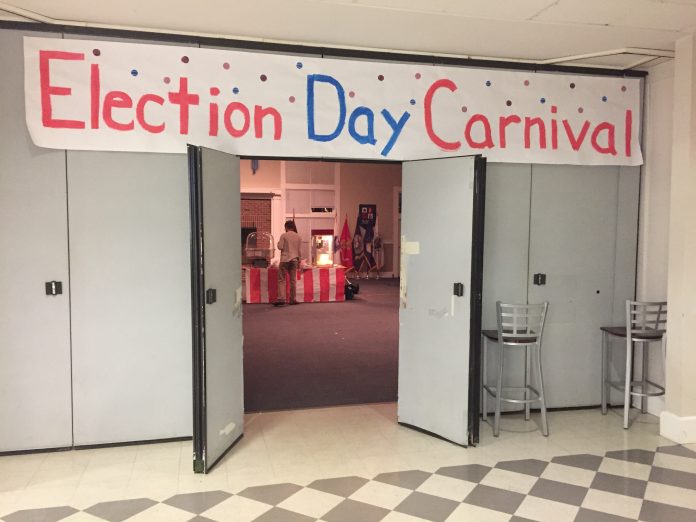 NextGen Climate reports that “91% of millennials want to transition to clean energy,” and as this group is 69.2 million strong, they could change the course of the future if they wanted to.  That’s why the organization was so focused on rallying students at NEC on Election Day.

On November 8th, there was an Election Day Carnival inside the Simon Great Room that lasted from 11 a.m. to 6 p.m.; representatives from NextGen were there to both encourage young people to vote and answer any questions regarding the process.

NextGen, which focuses on curbing the damage to the environment that climate change is causing, supported candidates for their stands on environmental issues.

Atop the tables, next to boxes of pizza and a cotton candy machine, were pamphlets reading #whywevote, which delineated the exact differences between the candidates for President, Hillary Clinton and Donald Trump, and on the other, the Republican Candidate for Senate Kelly Ayotte and the Democratic Candidate Maggie Hassan.

NextGen Climate backed Hassan because she wanted to advance the use of clean energy, while they didn’t recommend Ayotte because she supported dirty fossil fuels, voted on a ban that prevented the EPA from modifying carbon emissions, and voted for the Keystone XL Pipeline. The organization backed Clinton for the same reasons.

According to NextGen Climate, Clinton wanted to confront the climate crisis and hold polluters responsible for damage to the environment, spearheading the United States as the “clean energy superpower of the 21st century,” while Trump claimed climate change was a “hoax invented by the Chinese,” and sought to increase fossil fuel production, abandon the Paris agreement, and decrease environmental safety measures.

Abi Bradford, NextGen’s liaison to both NEC and NHTI, hosted the carnival for the same reason she became involved with the organization: she cares about the environment.  She said, “We are very much nearing the point of no return.”

There were many volunteers that Bradford, who’s from Maine, recruited to help host the carnival, including myself, and others from CiviCorps, but she said most were just students who were interested in the cause and weren’t necessarily from a particular organization.

Bradford said college age students are so important to NextGen’s cause because “millennials (born between the 80’s and the 2000’s) are the largest block of voters, and projections say 83% would vote in favor of climate change.”

Two student volunteers, who became involved after reading a mass email Bradford sent out, Freshman Mikayla Healey and her roommate, Freshman Meghan Szacik, read oracle cards at the event, which are similar to tarot cards but are more generalized. While another volunteer, Sophomore Oliver Sampeur, helped out because a friend had encouraged him to do so. Freshman Joey Lambert said he got involved after receiving a phone call: “It sounded interesting and I wanted to help out.”

Shuttles delivered students to and from the polls from 8am to 7pm at NEC and many students did go out and vote.

One student told me it was the first time she’d voted, as she’d never been old enough in previous elections, and initially she felt kind of overwhelmed, but in the end she was surprised by how easy it was.

Ultimately the outcome of the race wasn’t what NextGen wanted but the numbers were so close that it could have easily swung the other way and that’s why the organization put in so much effort at NEC.