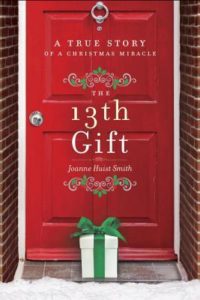 Joanne Huist Smith is a widow who lives in Dayton Ohio. When Smith lost her husband in 1999, she was left as a single mother of three grief-stricken children. In 2014, she published a memoir called The 13th Gift about the struggles her family faced during their first Christmas without their father, and how they overcame it.

When her husband refused to have necessary heart surgery until the holidays, in order to spend time with his children, he passed away before the surgery was performed, leaving his family alone during the holiday season. Joanne and her two sons, Ben and Nick, wanted nothing to do with Christmas. Joanne said that “All I want for Christmas is him.” The only one interested in Christmas was her ten-year-old daughter, Megan. The family hardly spent time together at all. When she wasn’t at work, Joanne spent her time on the couch, leaving her children to take care of themselves. Ben hardly left his room. When he did, he was out past curfew, and Nick spent all his time playing video games.

Twelve days before Christmas, a package showed up on their doorstep that changed everything. With a note saying, “On the first day of Christmas your true friends gave to you, a poinsettia for all of you.” Megan was the only one interested, leaving Joanne to throw the flower away. Day after day, gifts showed up, counting the days of Christmas: wrapping paper, gift boxes, and cookie cutters. The mystery of their true friends and the curiosity of each appearing gift began to give the family a reason to bond. Joanne began to realize that their family had not been abandoned during the difficult holiday season. ‘My gusto for Christmas may not be the same as in years past, but my kids will know that they are not on their own.”

Smith used a very simple writing style that matched this very simple story. Smith uses occasional flashbacks to memories of her husband to help the reader understand those nostalgic feelings.The heartfelt conversations with her children, learning to connect with each other, were emotional and well-written.There was real character development in Joanne and her children, as they let go of their grief and leaned on their gift givers to find hope. The thirteen chapters each represented a day leading up to Christmas. With each passing day, the reader is taken through the development of emotions the family experienced during those thirteen life-changing days leading up to Christmas Day.

It is an inspirational story about a family that learned to give as much as they received. I would recommend this heartfelt story to readers of any age. The heavy emotions throughout the book are lightened with pure moments of happiness. I felt myself learning from these experiences, and I couldn’t put the book down. It is a gentle reminder to appreciate the Christmas season as a time for giving and caring. A tale about a struggling family that learned to overcome grief through a Christmas miracle is the perfect holiday read.