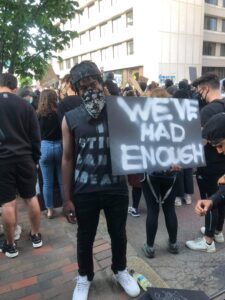 It felt like a revolution was beginning, seemed like a real change was coming. But after a few months, the energy changed. The movement wasn’t being posted or talked about anymore. Everyone took off their all-black outfits, tucked away their protest shoes and threw out their posters.

Was this all done out of post-quarantine boredom?

On May 25th and the few weeks to follow, it seemed like the world stopped. Minneapolis police killed George Floyd; one officer with his knee on Floyd’s neck while the others stood by and did nothing.

His death prompted a surge of demonstrations that focused on the Black Lives Matter movement. They started in Minneapolis and spread like wildfire. According to the Armed Conflict Location & Event Data Project (ACLED), there were over 7,750 recorded demonstrations linked to Black Lives Matter between May 26th and August 22nd. The protests happened in more than 2,440 locations across all 50 states; 95% of these were peaceful, 5% were violent.

I, myself, took part in the protests. I didn’t get to attend every one, but I signed numerous petitions, posted my thoughts on the issue every single day and made the one protest I went to count! This summer brought light to victims of police brutality. The list of names were posted and reposted everywhere. We called for justice for the victims of unsolved cases. The protests also gave us the opportunity to remember men like Michael Brown, Eric Garner, Freddie Gray, Philando Castile, and Trayvon Martin, whose killing originally sparked the Black Lives Matter movement.

One demonstration that everyone seemed to take part in was Blackout Tuesday. Online businesses shut down for eight minutes and 46 seconds, which was the exact time it took for Derek Chauvin to murder George Floyd. Users on Instagram and Twitter posted a black square with the hashtag #blackouttuesday and some people even changed their profile pictures to black circles. For some, this was just one of the ways they were using their voice or platform to support the movement. For others, however, it was the only time they spoke up.

While demonstrations remain ongoing, they have gradually declined since the peak in late May and early June. Why is this happening? Is there a need to march or post? It seems like there isn’t. Most of the black community declared that they were willing to cut off anyone who didn’t stand by them, myself included. Was it just a feeling of being pressured that had people speaking out? If so, we must keep applying that pressure.

There was a lot of debate surrounding the protests and everyone had their opinions. When the protests first began, things were a little out of control. Looting occurred and many people had a problem with that. They claimed it didn’t make the situation better, but why were people angrier about a Target than the black lives that were taken by police? Were the black lives less important than buildings that were burned down?

It seems that way now. There are fewer petitions being signed or shared and fewer people speaking up. There is a lack of interest in the topic once again. Are we just going to leave matters in the hands of current/former athletes? As America’s future leaders, we must do better. Bring back the petitions and plan for peaceful marches again. Let’s start holding people accountable for staying silent. The brutality is still happening, even if we don’t know about every case. One saying that stuck with me throughout the whole movement is “silence is violence.”

What will you do to help put a stop to it?