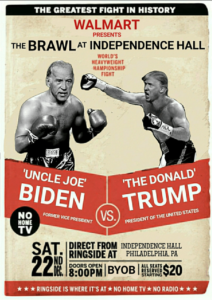 Boy oh boy was this a disaster of a week. As always, 2020 stepped up to the mound and threw nothing but curveballs our way. Between the most chaotic debate between Vice President Joe Biden and President Donald Trump and Covid-19 striking down more notable names in our society, there is just so much to unpack and I’ve already booked my therapy appointment, so let’s just dive in.

Thankfully, this week the crazy seemed to stay in two general areas: the debate, which was originally intended to be the sole focus of this article, and Covid-19 that weaseled its way back into the headlines nearly making everyone forget the dumpster fire that was the debate. I’m going to be honest, the past few days have been painfully hilarious, shocking, depressing, odd, and I’m at a complete loss for words. . . there’s no way to know how to feel about anything that has happened.

To start off, let’s take a look at the debate. For years, the debate has been a way for Americans to see where the presidential candidates stand on certain issues and who aligns better with your beliefs. In short, debates have been a way to help Americans decide who they’d want to vote for. Needless to say, as chaotic as it was, it helped me decide . . . on what bottle wine I’m going to buy to get through the next one.

The debate consisted of six topics:

Just like I said in last week’s recap, Trump spent most of this debate lying through his teeth, insulting everybody, and making a bigger clown of himself than 50 Ronald McDonalds trying to squeeze themselves into a car.

The moderator for the debate, Chris Wallace, could not have explained the rules any clearer.

Each person gets two

minutes to answer the questions  prepared for the candidates

Starting off with the topic of the Supreme Court, Wallace asked both candidates why they believed they should be the ones to fill the seat left behind by the late and great RBG. Trump’s response basically consisted of “I won four years ago, so I have the right to.” Former Vice President Biden’s response was that he believed that waiting until after the election gave the people a say into who gets too fill that seat. He then went on to talk about Trump’s nominee for the position, and what Trump plans to do with a 6-3 majority in the Supreme Court, stating that Trump wants to repeal Obamacare and overturn Roe v. Wade.

Of course, this entire segment consisted of Biden trying to get his answer out, and Trump speaking over him and interrupting him at every turn. However, it seemed like right from the very first question, we got a somewhat coherent answer from Biden and glorified boasting from Trump.

Now, both men had terrible performances at the debate, they both interrupted each other over and over again, Biden had his fair share of misleading claims, and Trump even began debating the moderator at times. If there’s one thing they both did successfully it was remind us all that kindgarten teachers are severely underpaid. If this isn’t enough to convince you that alcohol is no longer strong enough to be used as a coping mechanism, the biggest shock in the whole debate came when Wallace asked Donny to condemn White Supremacist groups such as the KKK and the Proud Boys. Which the President of the “free” world refused to do and instead instructed them to “stand back and stand by.”  Yes, you read that correctly. Our President basically instructed White Supremacists to start a revolution if Trump loses.

I couldn’t sum this debate any better than CNN anchor Jake Tapper did. “That was a hot mess, inside of a dumpster fire, inside of a train wreck.” Or, in blunter terms, Dana Bash simply put it, “That was a shit show”.

Look, debates are very important. They help us see where the candidates stand, what they believe in, what they’re plans are and how they compare to their opponents. If you have not watched this debate, I highly suggest that you . . . don’t. If you were planning to watch the next debate, I suggest that you . . . don’t. Even though the next debate might include an actual mute button for Trump’s microphone. There are plenty of other ways to see where these candidates stand. Joe Biden’s website contains his complete platform outlined and detailed. Trump’s website . . . well you won’t get any information there, but you will get VERY expressive emails, maybe try his twitter? Actually, don’t do that. Just do your research, and make the best decision you possibly can, and for the love of all that is good and holy, I cannot stress this enough, VOTE!

Moving on, so I can forget this debate ever happened.

‘Rona has done it again once more. The President of the United States has come down with the “Democratic Hoax”, or as scientists call it, Covid-19. Friday morning, President Trump took to twitter to announce that he and the first lady have come down with the deadly virus. This is very concerning as Trump falls in two of the categories that make him very vulnerable to the disease: he is 74, and he is overweight.

Many saw this as a possible hoax, maybe Trump trying to postpone the election or push the next debate, but this saga took a turn for the worse and just keeps getting worse by the second. Since announcing his diagnosis, RNC Chair Ronna McDaniel, Kellyanne Conway, Trump’s Campaign manager Bill Stepien, Utah Senator Mike Lee, North Carolina Senator Thom Tillis, Wisconsin Senator Ron Johnson, and Governor Chris Christie, who have all been close to Trump, have tested positive for the virus as well.

This story only gets stranger and more concerning the more you look into it. Friday morning when the news first broke, it was reported that Trump was asymptomatic. Shortly after it was reported that he had mild symptoms, which then turned into moderate symptoms. By midday, it was revealed that he was being rushed to Walter Reed hospital via helicopter, where he remains at the moment and is being monitored.

As of the time of this writing, it has been reported that the next two days are going to very critical for the president. White House staffers have said that the President’s vitals the last twenty-four hours have been very concerning. There have even been talks about invoking the 25th amendment. For those who don’t know, the 25th amendment states “in case of the removal of the President, or of his death or resignation, the Vice President shall become President.”

The next few days are critical for both the President and our national security. With some White House officials fearing that his time has come, there’s no telling what could happen. I could be writing about the swearing in of the new president next week, or Trump could have a miraculous recovery. Nevertheless, times have never been more uncertain.

I’ll leave you with this: with exactly one month till the election, and the President’s life probably at stake, the west coast still on fire, and the world seemingly not showing any signs of getting better. . . I’ve lost track of where I was going with this. . . well, um, Robin Williams once said, “you’re only given a spark of madness, you mustn’t lose it.”

Remember to go out and vote. Remember the importance of this election, and that no matter how crazy things get, if all else fails, at least we have each other.