Like many people who have been stuck at home for the last ten months waiting for COVID-19 to pass us by, I have started to thoroughly enjoy cooking. Aiding me in this new found passion is the discovery of Penzeys Spices. My girlfriend found them through her brother, so we ordered two gift boxes for my parents and my brother as Christmas presents, which featured a variety of different spices and seasonings. I quickly became jealous of them and, once I got my hands on some birthday cash, dropped $48.41 on spices.

While I thought I might have discovered an up and coming company, it turns out I’m 35 years behind. Based out of Wisconsin, the company was founded by Bill Penzey Jr. in 1986. Since its conception, Penzeys Spices has expanded their online and catalog sales steadily, while also operating 56 retail locations in 29 states across the country. Bill Penzey made national headlines in 2016 when he sent an email to customers that was highly critical of President Trump and his base of supporters. This led to some conservatives calling for a boycott of the company, but Penzey has continued to be an outspoken critic of the now former president. Regardless of your political opinion, however, there should be bipartisan agreement that Bill makes some damn good spices.

Just one look at the website lets viewers know what the company is all about; Penzeys is for those who love to cook and wish to use the best ingredients possible. The website is colorful, warm, and fun; filled with positive phrases such as Embrace Hope, Choose Love, Heal the World, Love to Cook – Cook to Love, and Love People… Cook Them Tasty Food. The website also features stories from many satisfied cooks who use Penzeys, whether it is for their business or for home cooking.

Another great feature from Penzeys is their large variety of spices and seasonings, with an array of ways to buy them. First, there is the option to buy many of their products in an inexpensive trial size, which allows customers to figure out if the product is for them before they order a bigger jar or bag. Second, Penzeys offers a number of salt-free options for those who have to limit the amount of sodium in their diet. One of my personal favorites, Mural of Flavor, which is also one of their best-sellers, is a salt-free spice blend.

But, if you still can’t find the perfect gift box, no worries. Penzeys has Your Way Boxes, which offers three different sizes of customizable gifts that can be filled with the spices and seasonings of your choosing. We decided to go with the gift box route because it made the perfect Christmas present for my family, especially because they include a fridge magnet and a small recipe book specific to which products are in the box.

But for my personal order, I decided to purchase as many spices and seasonings individually as my Visa gift card could buy. Due to high demand, Penzeys warned me in advance that my order would not ship until 3-5 business days after it was placed. I waited patiently and after about a week and half when I got the news that UPS had delivered Penzeys to my house. 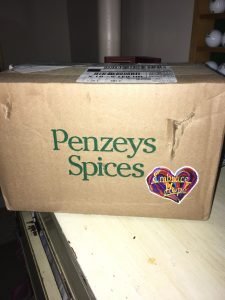 I’ll start my brief reviews with one of their best-sellers, which also happens to be the first Penzeys product I ever tried. Mural of Flavor is one of Penzeys’ most versatile products and can be sprinkled on nearly anything you set your mind to. This salt-free combination of over a dozen spices and herbs, working alongside complimentary ingredients such as garlic and orange peel, makes Mural of Flavor an understandable fan-favorite. When first looking at the ingredient list, I wasn’t sure how they would all fit together. It seemed like it could make for a funky combo. However, upon first taste, I quickly discovered that I was totally wrong. Each flavor profile holds its own distinct place within this spice blend, but none of them overpower each other. They work together in harmony and create the perfect taste. 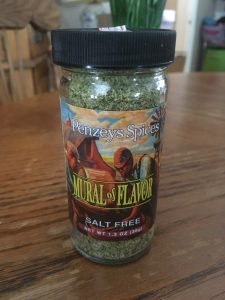 When we ordered gift boxes for my family, we bought a trial size of Aleppo Pepper and it quickly became my go-to. I would compare it in look and taste to a slightly milder version of crushed red pepper and can be used in the same ways.

But there is much more depth of flavor to the Turkish Aleppo Pepper and it’s a bit more tart, which makes it taste better and more sophisticated than comparable peppers. 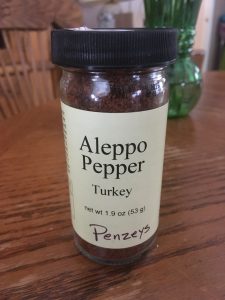 Because of how much I enjoyed Mural of Flavor, I decided to go with another salt-free option called Arizona Dreaming. It tasted the opposite of what I thought it would, as I presumed that the southwestern spice blend would be the bold flavor that stood out. It turns out that the citrusy elements of the spice blend were the first thing I tasted, followed by the warm heat of the spice blend. It was definitely something I would order again. 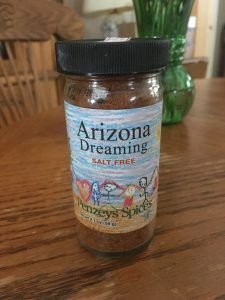 I also purchased a small jar of Bangkok Blend. This was the wild card of my order, as I had no idea what to expect or how I would use it. After tasting it, I’m still not quite sure. For one thing, it’s MUCH spicier than I pictured. It was easily the hottest spice blend in my order and it threw me off a bit, but I’m sure I’ll find some nice ways to use it. I’ll consult Penzeys’ website to find some good recipes. Though it is very spicy, it has a nice flavor once you get past the initial shock. A little bit will go a long way. As someone who’s become accustomed to whatever seasoning packets McCormick has had on the shelves of Market Basket, Penzeys’ Fajita Seasoning opened my eyes to a world of previously unknown possibilities. While the ingredients between the two are comparable, Penzeys amplifies each flavor, making for much more flavorful fajitas. It can also be used on rice and beans as well as either a rub or marinade for various grilled meats. 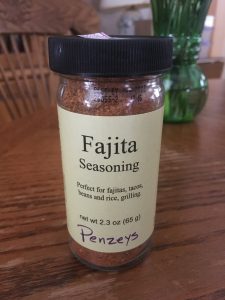 Penzeys’ Cajun Seasoning was one of the products I was most excited to try. It did not disappoint. Once again, it can be used on pretty much anything and I’m looking forward to incorporating it into nearly any food I want. Plus, I found a good-looking recipe for Cajun Chicken and Andouille Jambalaya on Penzeys’ website, so I can’t wait to try it out and expand my cooking repertoire. Long gone are the days where chefs need to add salt and pepper to their food separately. With Szechuan Pepper-Salt, you can get the best of both worlds. This combo works very well for vegetables if you are looking to season them, but still let the flavor of the veggies shine without overpowering them. I didn’t know if I would like it or not, so I only ordered a small jar with my order. After one taste, I experienced instant regret and knew I would be getting a much bigger jar with my next trip to their website. 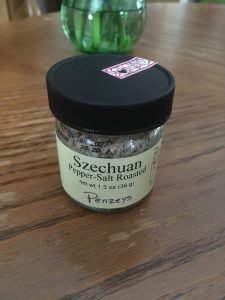 My experience with Penzeys has been excellent so far. I don’t usually enjoy shopping, but I loved picking out all my spices and was very excited when they came in. I would definitely suggest giving them a try if you haven’t already. You may never go back to supermarket spices again.

Can You Teach an Old Dog New Tricks?