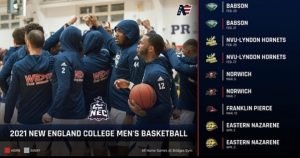 Some sad, but fairly expected news was delivered a couple of weeks ago.

On Wednesday, February 3rd, the NCAA announced that division III sports were going to cancel 2021 winter championships. The decision was based on “winter declaration showing low participation numbers” (per NCAA administrative committee). These numbers were a result of winter declaration forms given to members of D3 sports about their intent to compete in a shorter, different type of season.

More than half of the winter sports weren’t going to be able to compete in a season leading up to a championship, including men’s basketball.

“We are committed to ensuring that our student athletes have the best possible experience,” chair of presidents council Fayneese Miller explained, “We hope this is possible for our spring championship.”

So what does this mean for winter sports at New England College? 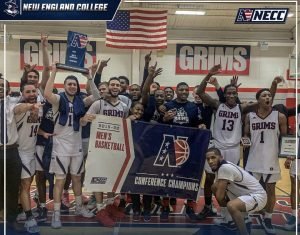 It’s easy to remember the 2018 men’s championship; when they beat Colby- Sawyer by almost 20 points, we ran on the court as “Dreams and Nightmares” by Meek Mill played on the loud speakers. It was the perfect college moment!

Men’s and women’s basketball were eager for another championship.

Luckily for 2020 seniors, they were able to get that last championship before graduation, but especially lucky to have had that chance before COVID-19 entered our lives. However, for the class of 2021, they are unable to get that last championship before graduating this year. Although a season seemed uncertain, New England College sports will take place this season; including men’s and women’s basketball and ice hockey, while following all of the necessary precautions.

I spoke with Calvin Cheek, a class of 2021 senior, about his take on the 2021 basketball season. 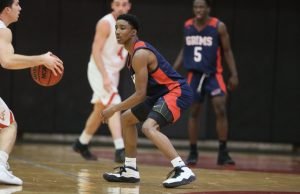 It has been a hard and unpredictable year, Calvin explained.

“Being an athlete during this time was so much tougher because staying home became the norm, since nothing was open for extended periods of time,” Cheek says, also explaining that it was “almost inevitable” to not fall right out of shape. Although there was uncertainty Calvin is still excited to play this season. He’s taking it day by day. He added, “I’m trying not to get frustrated at myself for not feeling like myself while I work to get back into playing shape.” 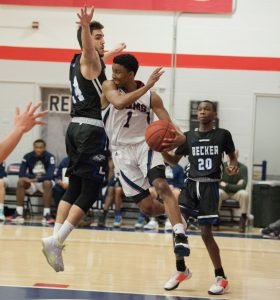 After staying in touch with coaches, Cheek was sure he would have some sort of season this year, “they made it clear that we would be playing, it was more of a question of who we would be playing.” When the world shut down, Cheek couldn’t picture an overall return to campus, let alone being able to play basketball, “I was indeed surprised but still thankful for the opportunity.”

“Throughout all of last season we made tremendous strides as an organization,” Cheek said, as the team won for the first time against a nationally ranked opponent, and then for a second time later in the season. It helped to build up hype around the teams name, “coming into this year, we were looking to capitalize on that.” I asked Cheek if he was confident about receiving the defense award for a fourth year? He answered, “absolutely I’m super confident in my abilities and know what I’m capable of.”

Assuming none of the games get cancelled, Cheek seems excited to get to competing. “We got some good teams on the schedule to look forward to, and playing good competition is always fun, no matter the circumstances.”

Cheek is graduating this year, with a chance of returning next year because he gained another year of eligibility from the NCAA. “Right now I’m focused on what’s ahead in the near future,” he concluded.

No fans, friends, or family are allowed to attend the games.

It’s true, students won’t be able to pack into Bridges Gym like usual; body to body, crowding in to watch our teams dominate. But, there are still ways to show our support for our fellow Grims. You can watch the live feed that NEC athletics will provide, as well as live stats. It also doesn’t hurt to wish them luck; make sure to reach out before men’s games and congratulate after.

The men’s basketball schedule is subject to change, so keep and eye out for anything different. You can find information about all 2021 winter sports at athletics.nec.edu. Also, check out their Instagram (@nec_athetics) and Twitter (@NEC_athletics) for more info.