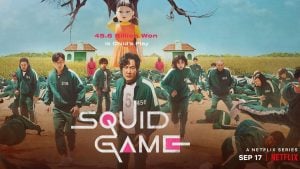 Surprisingly overnight, the world has been taken by storm over a new Netflix original series. “Squid Game,” follows a group of contestants as they try to win money by playing children’s games. “Squid Game” leaves everyone with a fascination, whether you’ve seen the various Tik Toks, memes, or controversies behind the show, a certain appeal strikes you. For me, after seeing countless Tik Toks regarding the show, I decided I had to give it a watch. After a mere 24 hours, I had binged watched the whole show.

As soon as I came back to campus from break, I knew I had to have my roommate watch it, and we binged it to completion again in less than 24 hours. This show just has that grab factor. Each episode leaves you hungry for the next. “Squid Game” has also perfected the shock factor. Each episode has an intricately designed plot, subtly tying together multiple characters and stories. The writers brilliantly gave you subtle hints throughout the entire season for every major shock however the hints were subtle you can only really pick it up after watching the show a second time.

The writer of “Squid Game” obviously knew exactly what he was doing. While it took him ten years to actually get the show off the ground, he wrote an absolute masterpiece of a show that deserves one hundred percent of the praise it received.