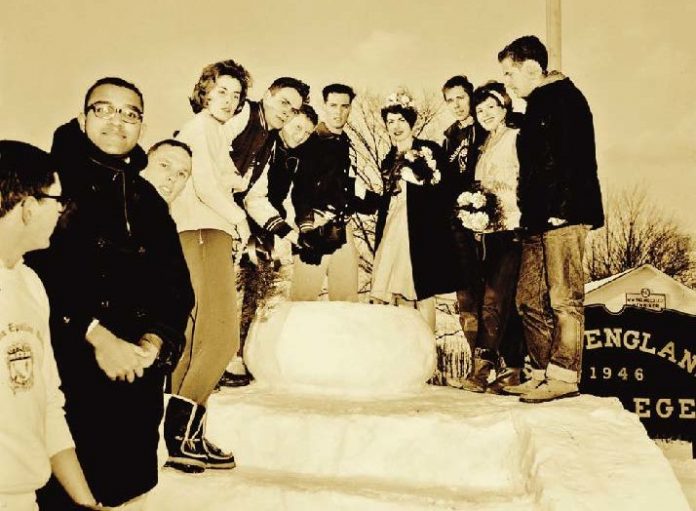 When NEC was founded Henniker was in severe trouble, said Cynthia Burns Martin, Professor of Business Administration, who’s been with NEC for over 30 years.

Telling this story, and that of the college’s long-held traditions, is Martin’s new book, New England College (The Campus History Series), which is composed of around 250 images, and went to press on Thursday September 22nd.

It will be the professor’s second book.  Her first, Vinalhaven Island’s Maritime Industries (Images of America Series) was published a year ago and is similar to this second book in two ways: they’re both comprised of photographs and provide accounts of businesses that begun with subsidies.  Like Vinalhaven Island ships were funded by the US government in the 1700’s after the Revolutionary War depleted the country’s fleet, Martin said Boone Tillet, NEC’s creator, financed the college through the support of the GI Bill that provided soldiers returning from World War II cash for college.

When Tillet first entered Henniker with the idea of setting up the college, Martin said it was somewhat of a ghost town as many houses had been removed and factories and mills shut down when the Federal Government Flood Control Project built the Hopkinton Dam.  As many of the river’s former mills employed townspeople, who’d since moved away in search of work, Tillet’s idea, which actually became a reality within six months, Martin explained, “was just an incredible act of faith.”  Tillet even recruited and transported the first students of NEC from other states into NH in his own vehicle when classrooms were yet to be established.

Martin smiled, “It just shouldn’t have happened, but it did.”

One first, that NEC’s known for, occurred because of the population it was serving at the time.  Martin said the college received a lot of press because they managed to graduate the veterans, who were in a rush to start their lives, in only three years because classes were year round.  This is a practice NEC is still recognized for today.

“We have a long history and tradition,” Martin said of the college.

It’s why Martin became interested in the project in the first place.   She came up with the concept during a meeting in which President Perkins presented a new strategic plan for NEC and talked about the college’s well-established background. As Perkins was speaking, Martin thought: ‘I can tell that story.’

“It was one of those lightbulb moments,” she remembered.

But Martin knew that in order to have enough images for the planned project, she would first need to locate thousands.  So she offered internships to two editorial assistants (students of NEC) Pei Sien Poh and Yuman He, and one to a research assistant (recent NEC graduate) James Carlson.  Martin said these three NEC students “participated in every aspect of the book’s production.”  But they confronted a problem immediately: no one knew where the photos were.  So Poh and He, along with Martin, searched the college archives.

“They didn’t know what they were getting into when they embarked on this adventure,” Martin said. “We got dirty.  She (Poh) braved cobwebs.  We went into the attic.  We looked everywhere.” 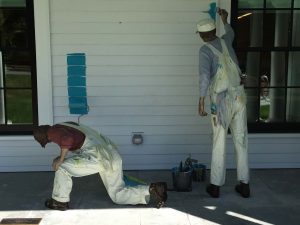 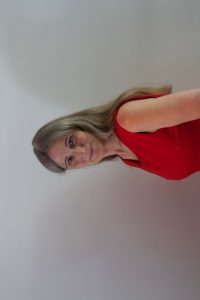 After an extensive search, the photographs were finally uncovered in Administration where the filing cabinets that contained them had been transported many years back during a period of renovations.  No one knew they were there, as it had taken a good deal of time to finish the renovations, and along with staffing changes, their location was forgotten.  As there were enough photos for the book, Martin made a proposal for the project and received the support of a good deal of people, including President Perkins.

“And nobody ever told me what to say,” Martin remembered.  “They just said, go do it.”

During the completion of the book, Martin discovered a lot about NEC that had previously been sealed in the past, like some of the sports images James Carlson assisted in identifying by matching faces to yearbook photos.  Inside these ‘black and white’s’ was a sport practiced at NEC called “car chuting,” where a parachute was tied to a vehicle that was then driven while the person was hoisted into the air, and the origin of River Day, which was a River Raft Race in which inner tubes were strung together to provide one massive raft that propelled down the river in the season after the ice melted.

Other photos featured the English campus where Martin (who’s actually the last faculty member who instructed there full-time) taught for ten terms. Because of the project, these historic images found their way back home to the college’s archives in CEI.

Martin’s publisher—the same one she used for her first book—Arcadia didn’t believe she could complete the project as fast as she did, especially while teaching full-time, but thanks to the help of Poh, He, and Carlson the entire book was completed from start to finish in one year.

Martin, also the Editor-in-chief of Edge Adventure NH, a commercial tabloid magazine produced by students of NEC that has distributed through the NH Department of Travel and Tourism, upheld the value of experiential learning, and said without these three students’ invaluable assistance New England College would never have been completed in the allotted time.

New England College  will be released December 5th of this year.