On Sunday November 5th, 2017 in Sutherland Springs, Texas, 26 people were killed when a gunman open fired inside a church during a service. According to TIME Magazine, the victims ranged from 18 months to 77 years old. Of the 26 people who died, 23 were found dead inside the church, while two people were found outside and one died after being transferred to a local hospital.

“The attack, which has become one of the most deadly mass shootings in recent U.S. history, comes just a month after a shooter opened fire on a crowd at a concert in Las Vegas, killing 58 people,” said TIME Magazine.

The suspected gunman, Devin Patrick Kelly, was later found dead in his car due to a self-inflicted gunshot wound.

Days following the attack, reports from reputable sources including CNN, The Washington Post, ABC News, and USA Today reported on the alleged perpetrator and his poor mental health history.

According to CNN, in 2012 Kelley escaped from Peak Behavioral Health Systems in New Mexico just months after he was accused of abusing his ex-wife and her child. In a police report he was also said to have snuck guns onto an Air Force base where he made threats against commanders.

The US Air Force acknowledged it did not relay information about Kelley’s court martial conviction for domestic assault to civilian law enforcement, something that “could have prevented him from purchasing the firearms used in the shooting.”

“Kelley, who had a record of violence, was consumed by a dispute with his mother-in-law and spent time posting anti-God and pro-gun statements on Facebook in the months before the shooting, according to officials, as well as acquaintances and former classmates,” reported CNN.

After reading through several articles regarding the gunman’s history as well as the atrocity he was responsible for, I am lead to wonder how he was able to get a hold of a gun in the first place.

Not only does this man have a history of mental health issues and domestic abuse, he had a police report filed against him prior to this attack that could have prevented him from buying guns at all.

I believe in the 2nd Amendment and that Americans have every right to bear arms.

However, Americans should be evaluated to be mentally stable, have no criminal records, pass a gun safety course with a 100% and have formal references in order to obtain one.

It takes longer to adopt a puppy, buy a car, or rent an apartment than it does to buy a gun.

Guns are not dangerous if handled properly and responsibly, but they are getting into the hands of unpredictable people.

For example, just recently there was a shooting at Dartmouth Hitchcock Hospital in Lebanon, NH. It is a well-known fact that guns are not allowed in hospitals and there are signs around the building at every entrance that say they are not accepted in the building.

But, a man walked right through the front door with his gun in his bag and shot and killed his mother.

There were no security checks upon entering the building, only a sign stating “No Guns.”

Stop signs barely stop drivers, did we really think a lousy sign would stop someone with a gun and ill-intentions from walking into a hospital?

Upon further research into the Dartmouth-Hitchcock shooting, investigators found that gunman, Travis Frink, similarly also had a long history of unpredictable and violent behavior due to alleged PTSD after serving as a U.S. Marine.

“As long as he was taking his medicine for PTSD, he was all right. When he got off the medicine, he would go wacko,” explained Frink’s father, Bob Ferriere, in a Valley News interview.

So once again, we have two gunman who were unstable and shouldn’t have had guns but did. While Frink was a military man, he did suffer from PTSD and if gun screening was better, he should have been unable to have a gun.

Well, what if he had possession of the gun from before he went in the military?

This is a completely legitimate circumstance that I believe probably happens in many situations where guns are used irresponsibly. 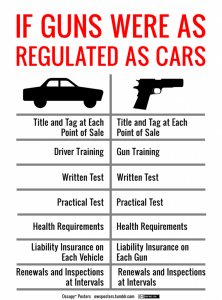 My idea is that each years guns will be brought with registration papers to the Town Hall where a psych evaluation will be completed as well as the gun will be reviewed for quality, safety and illegal add-ons. In the recent Las Vegas shooting, the gun used to kill 58 civilians was a rigged semiautomatic rifle modified to fire continuously like an automatic weapon.

If for some reason an individual does not pass the mental evaluation they will have their gun privileges revoked until the following year where they can be revaluated.

Not only will this create a safer environment, it will open new jobs in gun examining and pysch evaluations.

If you are buying a gun for the first time you should be required to go a gun safety course and pass with a 100%. You shouldn’t be able to go to Walmart and pick up some ham, milk and a semiautomatic weapon.

The Texas church shooting, Dartmouth Hitchcock shooting and Las Vegas shootings could have all potentially been avoided had stricter gun laws been in place.

I think stable and educated Americans have every right to bear arms and open carry. These people know that guns are not allowed in schools, hospitals, universities, prisons, post offices, cemeteries, and aircrafts and abide by those laws.

There have been too many lives lost to not do something about it. We shouldn’t be blaming PTSD or mental illness for the lives lost through mass casualties we should be blaming the outdated laws that allow people to buy guns who are not fit to have them.

If gun regulations became stricter, it would not be to punish those who have always done the responsible thing, but to insure horrible tragedies like these don’t continue to happen.