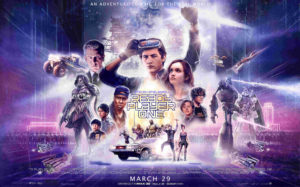 I had extremely high expectations going into Ready Player One, for me it wasn’t just the next Spielberg production. It had to provide a entertaining and thoughtful look into the world of the Oasis, it had to make me care about the story beyond the abundance of pop culture references and Easter eggs, and it also had to be a faithful adaptation of the novel, bringing a level of reverence and respect to the source material while also giving us a fresh take on the story within a different medium.

Ready Player One isn’t as good as the book in my opinion, it was however one of the most entertaining and thoughtful films I’ve seen in recent years. Steven Spielberg once again delivers a mesmerizing roller coaster of pop culture molded around a well crafted story about friendship, and our love of nostalgia and a simpler past. And also what it is exactly that separates reality from fantasy. We all live in our own little fantasy worlds as a means of escape, but where is the line drawn when we can’t discern one from the other.

The plot is more or less lifted straight from the novel, were our protagonist Wade Watts, played by Tye Sheridan, participates in a mass hunt within the Oasis for a hidden Easter egg left behind by the creator James Halliday upon the time of his death. Whoever completes all the challenges set forth and deciphers all the riddles will gain his left behind riches and complete control over the Oasis itself. Wade, in his Oasis persona Parzival, teams up with his close friend Aech and love interest Art3mis as well as others to find the egg before it can be obtained by Nolan Sorrento, the CEO of Innovative Online Industries, a global Oasis software company who seeks full control over the OASIS.

All in all this film did everything it had to: a faithful adaptation from the novel and a vastly entertaining film that celebrates a culture that doesn’t get the spotlight nearly enough.