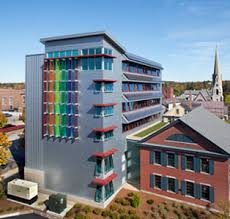 On Wednesday, November 28th, New England College President Michelle Perkins took time to speak and answer questions from the Student Senate at their meeting. President Perkins met with the students for an hour and fifteen minutes and addressed issues concerning them. The topic most discussed was the proposed merger in which the New Hampshire Institute of Art would become a part of NEC.

Students on the Senate were curious why the student body had not received any concrete information from the administration about the merger. Perkins explained that while she is fairly confident the merger would go through, nothing is official yet. She added that her level of faith was around 90%.

“This is one of the most complicated projects I have ever been involved with,” said Perkins, adding the reason for the complexity was many financial aid agreements as well as state and federal regulations.

Perkins stated that students would receive more information on the topic once the merger is officially complete. She hopes to be able to update the full student body before the end of the holiday break. However, while the merger may be signed soon, NHIA would keep some level of independence in 2019 before merging into a singular institution in 2020.

As NEC has grown in recent years a problem that has emerged is the lack of housing for students on campus. Perkins said that while we are pretty full at the moment, the merger would make NEC a richer institution and we would be able to purchase and remodel more housing. NHIA also has dorms in Manchester which could be an option for students who want a more urban feel than living in Henniker.

Perkins addressed some potential cons of the merger saying that if the administration did not plan correctly some of the issues facing NHIA could affect NEC. The dropping enrollment at NHIA is a main reason for the financial struggles at the school and why they sought out NEC for a merger. However, she mentioned that the application pool for the fall of 2019 at NHIA is already up from previous years.

Merging with an art school was a topic of concern for some students as well, as they did not see the benefit to those who did not major in the arts.

“You can still learn about digital and social media which is becoming more prevalent in society. Professionally these areas are growing significantly.  [The merger] will help with potential businesses to intern with in Manchester as well,” stated Perkins.

“First and foremost NEC will only benefit from the merger,” she said. “Our institution will not be drained at all.”

Social Media is a Drug

Social Media is a Drug