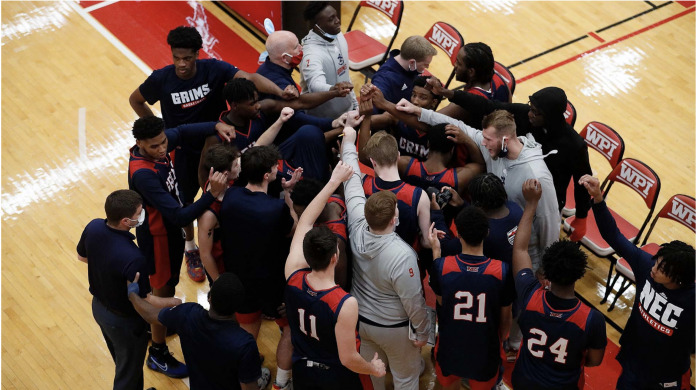 Teams roll on as their seasons continue. Some teams really find their groove, as they go undefeated for the week. Another team battles and finds their first win. Read along for this week’s sports recap.

NEC Women’s basketball started the week off with a 92-57 blowout win against Northern Vermont-Johnson University, Tuesday, Nov. 16, 2021. At the end of the week, they pulled off another win, 50-45, against Thomas University to go 2-0 for the week. The team is now 4-3 on the season. Women’s ice hockey was able to get their first win of the season, 3-2, against Anna Maria College. The team did not play any other games, so they went 1-0 for the week, moving to a 1-4-0 record on the season. Men’s basketball unfortunately started the week with a 83-77 loss against Clark University, but they were able to bring it back and win, 75-73, against Plymouth State University. The team now has a record of 2-4 on the season. Men’s Ice hockey played the 4th ranked team in the nation, Norwich University, and came out with a 1-1 tie. It was a defensive battle as the goalkeeper, Spencer Kozlowski, came away with 26 saves. The team is now 4-2-1 this season. For wrestling, Diego Santiago took fourth and Evan Fidelibus took sixth at the Doug Parker Invitational this week.

For Boston sports news, the Celtics came back after a heart-breaking loss against the Cavaliers last week, to beat them 98-92 this week. They then failed to go over .500 on the season, as they lost to the Hawks 99-110. The team went on to beat the Lakers in a statement game 130-108. Lebron James was able to play against the Celtics, while Jaylen Brown still remains out. The team finished the week strong, beating the Thunder 111-105. The team now holds a record of 9-8 this season, the first time they have been over .500. Jayson Tatum scored 30 points in the past three games and shot over 50% from the field during that span. The Patriots continue to roll as they defeated the Falcons, Thursday, for their fifth straight win. The Pats shutout out the Falcons 25-0. After the Bills lost against the Colts on Sunday, the Patriots are now in first place in the AFC East with a record of 7-4. The Bruins split games this week, beating the Flyers 5-2 but getting shutout by the flames 4-0. The Bruins are now 9-6 this season.

In other sports news, MLB’s Shohei Otani was unanimously voted American League MVP while Bryce Harper was voted National League MVP. NBA stars, Lebron James and Isaiah Stewart, got into an altercation Sunday after James inadvertently hit Stewart in the face. Stewart started bleeding from his eye, and both players went back and forth, as each ended up getting involved. Both players were ejected from the game, and Lebron was suspended one game while Stewart was suspended for two. Reports came out claiming NFL’s Antonio Brown had been using a fake vaccination card to be eligible to play. The NFL does not have a vaccine mandate, but Brown’s team, the Buccaneers, do. The NFL is conducting an investigation.

Farewell to our Editor-in-Chief