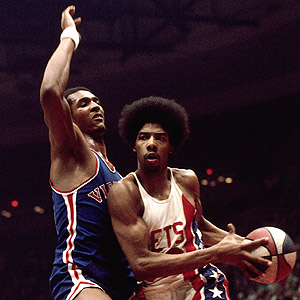 October 20th, 1976, marked a day that Nets fans everywhere despised. It was the day that Julius Erving, a basketball hall of famer, was shipped to the Philadelphia 76ers. But before all of this happened, it’s important to go back in order to understand why he ever sold in the first place.

Julius “Dr. J” Erving, a member of the Nets, was one of the biggest attractions of the ABA. His flashy skill set teamed with his natural athleticism made him a human highlight reel. A merge with the NBA meant a bigger market, and a bigger market meant more money would be flowing in.

Some teams from the ABA didn’t merge with the NBA–reason being, there was a $3.2 million-dollar entrance fee and those teams simply did not have the money. According to David Pincus, writer for SB Nation, it was merely impossible for Nets to re-sign Erving. He writes that Roy Boe, owner of the team, was “already strapped for cash” when paying the fee. Meanwhile, at the same time, the New York Knicks were forcing him to pay a “$4.8 million dollar territorial fee”, fearing that would interfere with their market in the NBA.

Erving, and his agent, Irwin Weiner, knew his value. They were asking the Nets for an increase in his salary, but Boe knew they had no money. He tried everything to satisfy Erving while also saving his franchise. When Boe eventually told him he would not able to give him more money, Erving threatened to sit out the season.  Boe had no choice but to sell his contract–he even tried to sell Erving’s contract to the Knicks in exchange for dropping the territorial fee, but the team eventually decided to decline that deal (big mistake, by the way). The Knicks ended up being one of the worst teams until drafting Patrick Ewing in the 1985 draft.

The Nets had interesting offers from the Milwaukee Bucks and the Los Angeles Lakers, but ultimately ended up selling Erving to the Philadelphia 76ers for $3 million dollars and the rest is history.

Erving’s new role with the team was not as heavy a load as he had to carry with the Nets. He had other player to help him out during his tenure with Philly, like three time NBA-All Stars George Mcginnis and Doug Collins, and–probably the reason why they finally won a title in 1983–Moses Malone.

Not much could be said about the Nets. Before the departure of their star, they had won two of the three last ABA titles, but in the NBA Erving-less, they ended up with a 22-60 record. Boe also ended up selling the team a year after because his debt was still in the millions.

The deal should still leave a sour taste in Nets (and Knicks) fans mouths. To have a high caliber player like Erving and let him slip from your fingers should haunt an owner’s life forever. After Boe passed, David Pincus also notes that the “New York Times obituary read: “Roy Boe, 79, Owned 2 Teams but Sold Dr. J.”

If there’s one lesson from all this, it’s that debt is one a helluva curse.

The Kayfabe Chronicles: Eddie, Rey, and the Custody of Dominick

Does This Hold Up?: White Chicks

Esports gets a New Director

Boos and Brews Coming to You