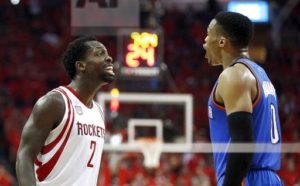 James Harden and Russell Westbrook are must-see television; there is no question about that. On one hand you have a guy who averaged a triple-double for a season and on the other hand you have a man built for Mike D’Antoni’s offense. The series ended in five games but the energy in that series was similar to that of a Western Conference Finals.

It was obvious who had the better roster. For Harden, his teammates had his back in game three when he was playing with a bad ankle and for Westbrook, he had to keep bricking shot after shot for four quarters every single game, only to come out with one victory.

The postseason brings out a different animal in players. Since it is a do or die situation and every game counts, they will do whatever it takes to win. For Westbrook, the only player he could trust out there was himself, and no one can blame him for doing what he has been doing the whole season.

His 41.7 usage rate in the regular season only seemed to grow as the series went on while Harden was able to rely on his teammates. But did we see it going any other way?

The playoffs are built for teams to come together as a collective unit to ultimately make it through four rounds. So did anybody ever think the one man wrecking ball was going to get past an army led by the bearded one and then some? Probably not.

It was noticeable as the series went on that Westbrook was running out of gas. His last hoorah was in game five when he shot 2-11 in the final quarter. He did still manage to average a triple-double throughout the series, but I’m pretty sure he would trade a series win for those eye popping stats.

Westbrook had one of those seasons that could change the way basketball is played. Nowadays there is always that one player dropping buckets from around the half-court line like Curry. This matchup shouldn’t determine who wins the MVP trophy just like how teams don’t lose their division title banners due to their poor playoff outings. Look for Westbrook to walk away with the award on June 26th while Harden continues on his path to win his first NBA title.