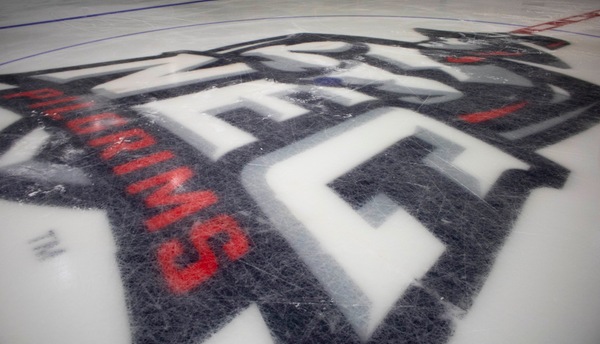 After nearly a year without sports at NEC, men’s and women’s ice hockey took to the ice for back-to-back non-conference matchups. With COVID-19 being at the forefront of all decision making within the college and its athletics department, both teams had precautions and safety measures set in place weeks in advance in order to prepare for their debut weekends.

Cianna Weir, junior goal tender and assistant captain of the women’s team, said, “I cannot control COVID or our schedule.” Which proved to be true just two weeks into their season, when competitor Norwich University dropped out of all their scheduled hockey matchups for the foreseeable future. Both men’s and women’s ice hockey were lucky to have been able to find replacement opponents for their weekend games.

Weir stated that time restrictions in the rink have been one of the biggest differences from her prior years at NEC. Although she has gotten used to it after some time, “[her pregame ritual] feels a bit rushed, only because [she is] so used to having all the time in the world.”

“In the past, we have been allowed to arrive as early as we would like or need, but now we have very specific times to show up to the rink [before a game],” explained Joshua Chamberlain, junior defenseman for the NEC Men’s Ice Hockey team.

Both teams are tested three times a week in order to be able to practice and compete in games. Players are given two rapid tests and one PCR test (a higher standard of COVID testing) throughout the week. While the testing has been an easy task for many players, the same cannot be said for wearing masks during practice. Much like every other NEC athletics team, masks are to be worn or attached to helmets. Chamberlain says, “playing with masks [has] made the game seem more difficult.”

Chamberlain and Weir both made sure to give credit to the unsung heroes of college athletics during COVID: the athletic training staff. “The training staff and athletic department have done a great job assisting us in [maintaining] guidelines to keep us safe,” said Chamberlain.

Weir added, “our trainers are spectacular, they’ve always accommodated us, and now more than ever.”

Men’s and women’s ice hockey are staying optimistic in hopes for a successful and fulfilling season. As Chamberlain explained, even with all the guidelines in place, the men’s and women’s team has no complaints because they are all just happy to be on the ice after all the crazy turns this past year has taken. The women’s team is no different. Weir stated it perfectly when she said, “we’ve adjusted to a season never experienced [and were able] to boost morale and still bond as a team.”

Men’s Ice Hockey (1-3) heads into a double header weekend against Castleton University on the 26th and 27th, while the women’s team (0-3-1) will face-off against Becker College Friday and Saturday. All four games will be live streamed with no in person attendance.