March 15th, 2020: New England College sent out a mass email, announcing they would be going remote until further notice. President Perkins also announced that those who were high risk or wished to go home, had that option. Some students were overjoyed with a nice “vacation,” some were excited to be able to go home and relax and others were dreading the idea of returning to unsafe family situations.

N.E.C. gave students a few days off to get acclimated to the new schedule. We all thought this would only last a few weeks or months.

It has now been an entire year; a year of deaths, illness, quarantining, and wearing masks to protect ourselves from a deadly virus that we thought would only last a little while. We watched the news for the first couple of months, witnessing a failed president downplay a virus and making racist comments, calling the Covid-19 virus the “Kung-Flu.”

The death toll racked up to a thousand, then 10 thousand, then 100 thousand. We sat in our homes, watching weekly updates from the White House telling us about social distancing. Medical professionals worked overtime, restless. Retired nurses and doctors were being called back to help the sick. People protested against mask wearing, QAnon claimed the deaths weren’t really caused by Covid and hospital staff protested as well, begging for better P.P.E.

Millions of people lost their jobs and were forced to apply for Unemployment for the first time in their lives. Other countries took the virus seriously and started opening back up, enjoying concerts and gatherings again.

Stores throughout America ran out of toilet paper, canned food, water, and masks. 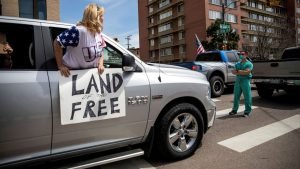 States started to open up regardless of the rise in cases and hospitals became overpacked again and again, begging for more supplies like ventilators. Trump continued downplaying the virus. And then, Black Lives Matter Protests, White Supremacy Protests and mail-in voting controversy during the election brought a new bout of problems to be solved for the United States.

Biden was then voted into the White House as the 46th President.

4 months into the pandemic, doctors and researchers were hard at work trying to develop a vaccine, and about 8 months later, one was finally created. It’s now March 22nd, and we are knee-deep into vaccinating the nation, but that was only kickstarted once Biden was elected. We are very far from being able to go to concerts, or have the daily death toll and cases go down. But we can hope that with continued vaccination, mask wearing, and other continued safety measures, we will eventually reach herd immunity and be able to have “normalcy” once again.