Have you ever wanted to pack up your things and go?

Take the fundamentals of a home, put it on wheels, and don’t stop until the gas light glows yellow. Feel the adrenaline pumping through your veins as the unknown future unfolds in front of you. There is endless land to be explored, and more importantly, to be enjoyed. If the opportunity was staring at you in the eyes, would you risk it?

Yes? Take a seat, buckle up, relax, and enjoy the ride, the Joy Ride.

“Taking this risk was one of the biggest steps we have ever taken, especially leaving our families, our schooling, and overall our whole lives.”

Haddam, Connecticut, in Middlesex County, is where two small town boys grew up and started making a name for themselves. Markus Trahan (21 years old), is a filmmaker who wants to take every day and turn it into their own personal movie. Kyle Aitken (22 years old), is someone who lives to capture life’s purest moments and has always dreamed of traveling. They have taken their passions, combined them and are now on the road and documenting their unique experience.

The idea sprouted in a cramped University of Rhode Island dorm room in 2017-2018. For both Markus and Kyle, this was their first year attending college; Markus at URI and Kyle at Keene State. “College wasn’t the right option at the moment,” Kyle begins to explain, “but we wanted to continue to learn and grow in our own ways.” Understanding that Haddam could only offer so much, branching out and venturing from Connecticut was the ultimate goal.

“The ironic element of dropping out of school and moving into the school bus yielded our name, the Skooligans,” Markus stated, sharing how the dream started becoming a reality.

The Skooligans consisted of three members, Markus, Kyle, and their third party. While talking, they came to the conclusion that converting a vehicle to live out of would be the most logical option for the three of them. Being able to travel, have enough room to live in a somewhat normal “home,” and also doing it for cheap, was taken into consideration.

On June 10th of 2018, it was announced to the public on Instagram that the guys had purchased their first vehicle, a yellow school bus. Unfortunately, after spending a decent amount of time remodeling the original Skooligans bus, it began to give the boys some engine issues. As mid-July rolled around it was time to ditch bus number one and start searching for number two. Not long after they found a perfect “funsized,” as they like to call it, GMC white bus. By the end of July they restarted their process and began reconstructing again.

Finishing touches were applied in September, which meant it was time to hit the road.

“Telling your parents that you want to drop out of college and move into a school bus in the same sentence is a bold move,” says Kyle, “but they must have known we were crazy because they were all extremely supportive.”

With taking such a big leap onto an unknown path it is insanely important to have a strong supportive system.

This being the first time it was just them, the bus and the road, there were a lot of things that had to be considered. “You always have to be thinking in the future tense,” says Markus, “our most frequent thoughts were; where will our next meal come from? Where will we park tonight? Do we have enough gas to make it to the next station? Are we budgeting our expenses correctly?”

These are valid questions that needed to be decided before the sun went down. As you could imagine these constant thoughts could lead to potential downfall.

“The most difficult part of being on the road is access to resources,” Markus explains. “Almost the entirety of our route planning must revolve around these limitations.” The common resources both Markus and Kyle agreed upon were access to showers, bathrooms, a clean water source, cell service, heat at night time and AC throughout the day. Without these “simple” necessities most people take advantage of, the road can be your worst enemy. Being able to clean yourself and have access to a safe water source is something a lot of people take for granted. 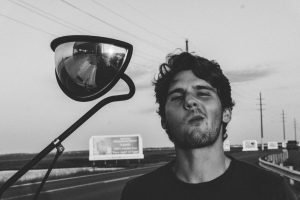 The three Skooligans made their way down the east coast, taking pit stops here and there. For a while they found themselves in the state of Florida. While there, they met with a bunch of other travelers, all with well developed buses. This experience gave the boys a better outlook on living rather than “surviving” in their bus.

A couple weeks later, some heads started to butt, and the Skooligans went their own way. “After several weeks on the road, conditions became harsh and money went fast. We all were under a lot of stress and the group decided it was time to explore new options,” Kyle said.

After the split between the Skooligans, Markus and Kyle used the knowledge they have learned while on the road and took advantage. Saving up on money and starting fresh, the two of them were able to buy a Japanese Right-hand 1994 Mitsubishi Canter Mobile Home. Once again they worked on renovating their new “home” but this particular vehicle posed some problems; every single thing was written in Japanese. They have been documenting their new lifestyle and posting “vlog”-like documentary videos and posting them on Youtube.

From the Skooligans, the Joy Ride Docs have been created. 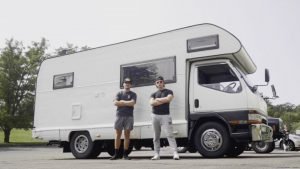 By this time, being on the road became natural to them.

“Safe places to freely park our vehicle became easier to find, conserving money and resources had become a habit, connections we’d made across the country allowed us to grab a hot shower periodically,” says Kyle.

Their lifestyle was finally becoming more normal, which allows them to work more productively and efficiently.

“We always seem to re-learn the same lesson on the road. Relationships and time are the only assets worth valuing. No amount of money or recognition can beat a good time with your closest loved ones. The memories we share with each other and the folks we meet along the way are priceless,”  Markus added.

Their initial risk has given many opportunities to Markus and Kyle. They have been able to explore so many new places and also are allowed to share them with the world. The most exciting places the boys have traveled to include Assateague Island, MD. Markus explains that the wild horses are “extremely unique” in this area. They’ve also explored trails within the Grand Canyon, Charleston, SC, and of course the amazing surf of San Diego, CA.

“This step gave us an incredible sense of being able to detach ourselves from the normal society which ultimately made it easier to find things we really enjoy doing!”

Exploring yourself, the road, and new places is what these pair live for. It is all about the experience and living your life to the fullest potential. They want to bring their story and adventure alive through film and the brilliance of photography. Without taking that initial risk, their lives would be extremely different.

If you have ever considered living out on the road and seeking change for the better, or even just want to follow Markus and Kyle’s story, take a trip and join the Joy Ride, JOY RIDE DOCS – YouTube (instagram) @joyride.docs.