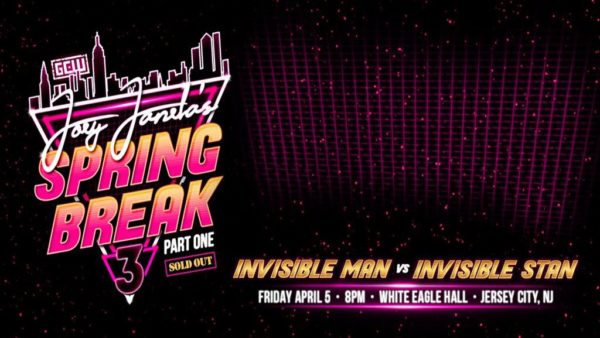 GCW (Game Changer Wrestling) would hold a memorial service for Invisible Man, which involved his entire invisible family. However, Invisible Man would return from the dead, looking to get some revenge on his brother, Invisible Stan. To do so, he would challenge him to a match that would end up with both men spewing invisible blood.

Referee Bryce Remsburg officiated and before starting the match he put on a pair of sunglasses that gave him “Bad Boy Vision,” which allowed him to see Invisible Man and Invisible Stan. This match received an amazing amount of praise. The crowd absolutely went nuts for two non-existent men doing non-existent wrestling.

It’s amazing how well they were able to execute this match. You had Bryce Remsburg shadowing their movements, and, at one point, he stopped the match to put on gloves and check for blood and even contemplated throwing up the “Red X” (when a performer actually gets injured during a match, the referee will throw up their arms into an “X” so that medical personnel backstage know there’s been a legit injury and they need to go out and possibly stop the match. This is known as the “Red X” symbol).

As Remsburg tried to throw up the Red X, invisible Man stopped him, implying he wanted to keep the match going. They had Invisible Man and Invisible Stan go up to one of the balconies in the arena, where one of them would be thrown off into the crowd of people who would come tumbling down with the fallen wrestler. The crowd then broke into a “Holy Shit” chant as the commentators state that it was a “dangerous thirty foot fall.”

Another wrestler also interfered in this match. After Invisible Stan accidentally knocked out Referee Bryce Remsburg, Kikutaro, an ally of Invisible Stan, got involved, but took a beating from Invisible Man. Eventually, Remsburg would regain consciousness and throw Kikutaro out of the match. They even managed to have Invisible Man put Invisible Stan through a table, a table that would spontaneously break in half. I still don’t know exactly how they were able to make that happen.

I would love to describe the whole match, but it’s extremely hard to do considering it’s two invisible beings. However, if I’ve piqued your curiosity, you can watch this masterpiece below.

Invisible Man vs Invisible Stan is proof that the wrestling community can make anything work so long as they have the crowd on their side. Invisible Man vs. Invisible Stan wouldn’t have been possible if the crowd in attendance wasn’t as into it as they were. It took a lot of participation from Bryce Remsburg and the audience to pull this off. While it may be the stupidest thing on earth, it’s also one of the most hilarious things you’ll ever see. After all, it was voted GCW’s Match of the Year.

The Kayfabe Chronicles: The Brothers of Destruction