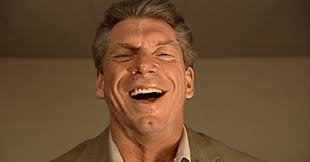 Since the day Chairman of the WWE Vincent Kennedy McMahon bought Ted Turner’s company WCW, he changed the scene of professional wrestling. For the next twenty years, Vince McMahon’s wrestling company would become a household name, a monopoly in the wrestling business. It was during his famous battle with Ted Turner where Vince McMahon would create his famous yet equally infamous character on screen.

Vince McMahon would portray an evil version of himself, known as “Mr. McMahon,” a conniving boss who would force you to kiss his bare rear (literally), fire you for the smallest inconvenience (or because he just feels like it), fight his daughter in a street fight against himself, fight against God (yes, you read that right… God… and McMahon won), spearhead a cult (and crucifying his daughter with said cult), and countless other examples.

Throughout the years, Vince McMahon was a big part of the WWE’s main show. Eventually, as he got older, he began to take himself off the screen and focus more on producing the show and doing his actual job of being the Chairman of WWE. However, his “Mr. McMahon”character seemed to never have left the screen. As the WWE grew bigger, so did Vince’s ego. Thus, his character slowly became a part of who he was. While it’s never been confirmed that Vince McMahon truly believes he’s this evil boss he played on TV, his actions speak louder than any of his words ever could.

Vince has done some pretty bad things that are publicly known. One of the worst things he’s ever done revolves around professional wrestler Owen Hart. On May 23rd, 1999, WWE held the Over the Edge PPV. Halfway through the show, Owen Hart (under the character of the Blue Blazer) was set to fight against The Godfather for the Intercontinental Championship. During his entrance, Hart was meant to descend from the ring in a harness. Due to a malfunction in the hardware, the harness latch broke and Owen Hart fell to his death. It was later revealed that Vince and the WWE knew that the latch that connected Hart’s harness to the line that was bringing him down could not support his weight. In the aftermath, Hart’s widow filed a lawsuit against the WWE, to which Vince McMahon  responded to with a counter lawsuit on the grounds that per Hart’s contract, she was not allowed to sue him and the company outside of Connecticut.

In another instance, former WWE superstar Sable decided to quit the company in 1999. She immediately filed a $110 million lawsuit against the company for sexual harassment and unsafe working conditions. Vince McMahon responded to this by counter-suing Sable for control of her stage name. They eventually settled out of court. Sable would make her return to the company in 2003, where Vince McMahon would put her into a storyline as his mistress.

The most recent example of Vince playing the role of evil boss in the real world, happened at the start of the pandemic and continues to go on now. At the start of the pandemic, when most companies were doing their best to accommodate and take care of their workers, Vince McMahon decided to begin doing massive cuts to their rosters. Every couple of months, Vince decides to fire a large group of his employees. The last instance of this happened on November fourth of this year. McMahon fired about 18 superstars active on his roster along with a few cuts from the backstage crew. The company cited budget cuts as the reason for the firings. The kicker: WWE announced their quarterly earnings an hour before they announced the “budget cuts,” where they boasted pretty high earnings with a revenue total of $255.8 million. A fifteen percent increase in earnings.

These are only very few examples of the many instances where Vince McMahon has channeled his evil on screen persona into the real world. Again, while it may not be confirmed that Vince truly believes he is the same evil boss he plays on TV, the many horrible and despicable things he has done since that character debuted on TV speak for themselves. Vince McMahon can stoop to the lowest of the low, and no matter how much money he makes, he will never be able to undo the horrible things he has done.

A Call for Change