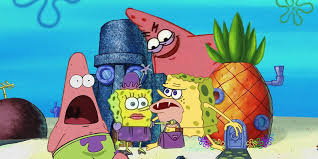 It has become very clear with all the recent memes and Tik Tok trends surrounding the lovable cartoon “Spongebob Squarepants”, that it within itself has been integral to the lives of Generation Z. Recently, whether it be the stress of finals week, or the rapid realization that I’m turning 23 in 10 days and adulthood has finally caught up to me, I’ve gone back and watched several episodes of what many in our generation consider the greatest cartoon in modern television history. It didn’t take long for me to draw parallels between the show and the general identity of Gen-Z.

When you take a look at Episode 17 of Season 2 titled “Procrastination,” one simply cannot deny the relatability of watching Spongebob struggle to write an 800 word essay on what he learned in boating school. Looking towards the current labor issue, one can’t help but think of “Squid on Strike.”  Even Season 2, Episode 12 “Pressure” was groundbreaking because the whole thing can be considered a metaphor for racism! Even then, this is just the beginning of many examples I can pull from the show. Most principles that Gen-Z rely on can be traced back to one or several episodes of this show.

Yes, Spongebob is stupid. It may be one of the most ridiculous shows to ever exist. However, its effect on society, both culturally and in the shaping of a generation, can’t be overlooked. “Spongebob created meme culture,” says Sam Campanella, a soon to be graduate of NEC. “At the very least, it predicted it through its use of non-sequiturs and double entendres”. When asked whether or not he believes Spongebob helped create what Gen-Z is today, he responded, “I think it is imperative to what Gen-Z is today”.

“It was a nostalgic show from our childhood”, said Ty Hunter, student at NEC. “It not only entertained us kids, but impacted our humor and social skills”.

It became very clear just how much this show means to our generation as well during Super Bowl Fifty-Three when it was announced that the famous “Sweet Victory” performance from Episode 15, Season Two “Band Geeks” would be making an appearance during Maroon 5’s halftime show. During the half-time show, the famous intro was played, but was cut off for Travis Scott’s performance, thus sending the internet into a full frenzy.

It’s not really surprising that people would react this way either. The performance was meant to be a tribute to Stephen Hillenburg, creator of Spongebob, who had passed away that year. For a generation who holds this show very dearly to their hearts, it only made sense that cutting off one of the most memorable scenes in the show’s history would elicit a reaction like this.

Whether it be through meme culture, Tik Tok trends, or just general relatability, Spongebob Squarepants has always had a major impact on the lives of Gen-Z. It’s colorful humor and uniqueness inspired a generation to grow into their own unique sense of style. They did so by integrating the show’s humor and lessons into their daily lives. Who knows, maybe Spongebob culture will live on long after Gen-Z is gone, or maybe we’re all just Goofy-Goobers using nostalgia to get us through our daily lives.