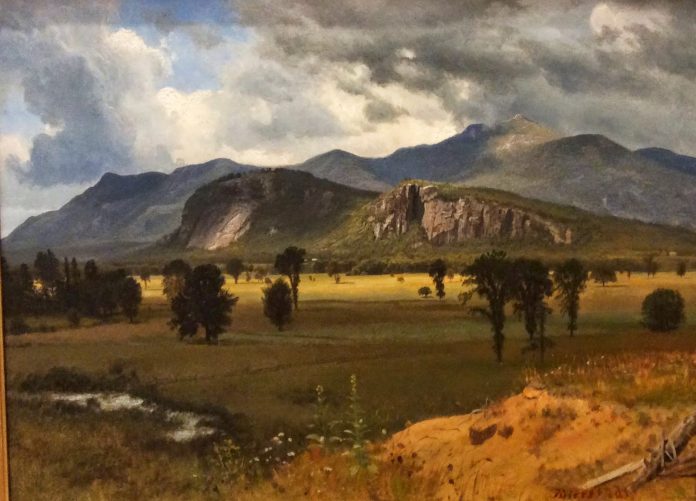 All NEC students can go to the Currier Museum of Art for free with their student ID, anytime, as NEC’s a university member. But right now is a particularly relevant time to make the trip.

That’s because NEC’s own Inez McDermott, Professor of Art History, is a co-curator of the exhibition “Mount Washington: The Crown of New England,” which is currently open for viewing at the Currier in Manchester, NH, and runs until January 16th (costing an additional $5 for non-members).

Curating this exhibition along with Andrew Spahr, Director of Collections and Exhibitions at the museum, McDermott, who’s been a professor at NEC for 16 years, said this is the largest collection the Currier’s ever featured.  But it’s also the first museum exhibition comprised of only Mount Washington region pieces of art, according to the Currier Museum of Art.

Pieces on display include vintage photographs, paintings, prints, and illustrated guidebooks from the 1820s -1870s, which provide examples of how NH’s best known scenic landmark, in an artistic/historical context, “became a national and international symbol of the American landscape, a center for scientific study and one of the country’s most popular tourist destinations,” reported the Currier.

The focus of the exhibition is based around the intersection of art, science, and tourism surrounding Mount Washington in the 19th century, McDermott, who took a sabbatical last year to complete it, explained.  It’s the largest collection she’s ever worked on, with major paintings including Hudson River School artists Albert Bierstadt, John Frederick Kensett, Thomas Cole, Jasper Francis Cropsey, and David Johnson, according to the accompanying catalogue, Mount Washington: The Crown of New England, and other acclaimed painters, like Winslow Homer and George Inness.

“A lot of museum exhibitions are just paintings, sculpture, or photos,” McDermott explained.  “We really wanted to mix the different media.”

Compiling all the pieces featured took McDermott, and others, three years, and even prior to that period, the museum had been talking about doing an exhibition like this for about ten.  But once the Currier Museum of Art finally decided, first they had to isolate a scope and then create a “wish list” of what they wanted to borrow from other museums and collections and talk to private collectors/dealers to locate additional pieces.

It was a lot of work, but the research was really what McDermott appreciated the most about this project.

“I love to research,” she smiled.  “I got to go to historical societies and find photographs and publications.  And the personal letters of one of the first landscape photographers in the US.”

McDermott became involved in the exhibition as a result of her connections with the museum. After graduate school her first professional job was working there, before she came to NEC in 1992 to run the art gallery. She then left for a while to do some freelance curating, and returned in 2000 to teach full-time.