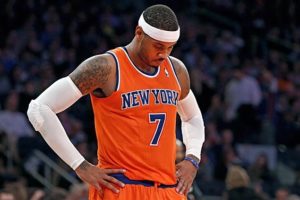 Carmelo Anthony has been through this before. He has been through trade rumors and speculations with the Denver Nuggets, before he forced his way out to the New York Knicks. But once again, this déjà vu is reoccurring. He’s trying not let it become a distraction for his team, that is trying to make the playoffs for first time since the 2012-13 season. This is something fans should appreciate.

After their home win against the Charlotte Bobcats, Carmelo admits that dealing with the rumors can be exhausting.

“You got to be cut from a different cloth to take this day in and day out, to deal with this all day long every day,’’ he said. “You have to take the good with the bad. I don’t know how I do it, but I do it.”

Ever since the Knicks’ Christmas day loss to the Celtics, they have lost fourteen of their last nineteen games, leaving them at the bottom half of the Eastern Conference. But it isn’t fair to hold all those losses to one man, who is 32 years of age and under his fifth head coach since joining the squad, according to NBA.com.

It’s impossible to calculate a percentage of how many Knicks fans want Carmelo gone, but Madison Square Garden crowds boo and grunt as soon as he puts himself in isolation plays. Even during their away game against the Atlanta Hawks, the crowd began chanting, “lets go Clippers,” a team that has been in trade talks with the Knicks about acquiring him.

This year marks the first time that Carmelo wasn’t initially invited to the all-star game. Due to Kevin Love’s injury, Carmelo was chosen to be his replacement. But fans should be happy that he wants to focus on the team and try to make things work before it’s too late.

“A little disappointed, but at this point it’s kind of bigger things to worry about,”

Carmelo signed a no-trade clause, which means that he would have the final say on where he would get traded to if he believes it’s time to part ways with the franchise.

But to boo a man who forced his way of the Denver Nuggets to make the Knicks relevant to try and bring them a championship, is something we should all look up to. According to ESPN, he gave the team their first playoff birth in 2010, something Knicks fans had not experienced in the six years before that season.

The New York media will pick you apart if you aren’t winning, but that is something Carmelo understands.

Carmelo doesn’t deserve all of this drama. For one, he doesn’t want to let it be a distraction when there are bigger things to worry about, like making the playoffs. All he wants to do is bring a championship to New York, so why do the fans and the media hate him? His job is to play basketball, and that comes with staying in shape, having a top notch IQ, and getting ready to lace up the sneakers when game time comes around. So all the unnecessary articles and speculations is something that shouldn’t bother him. For being focused and staying positive, he should receive praise and respect for never giving up.

Should the Thunder-Rockets series determine who is the MVP?