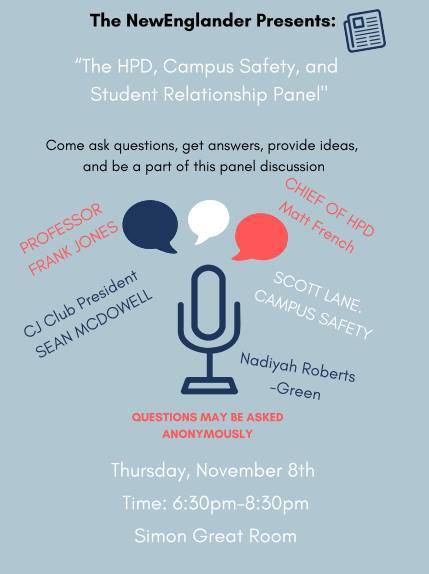 On Thursday, November 8th, the Simon Center Great room was filled with a mixed crowd of 100-plus NEC faculty, staff and students, along with Henniker community members, Campus Safety and HPD officers, for a panel discussion entitled “The HPD, Campus Safety, and Student Relationship.”

“We wanted the panel to be as diverse as possible, so it genuinely represented NEC,” said Jordan Bethea, a staff member for The NewEnglander.

Students and Henniker community members were able to ask questions directly or anonymously by writing them down on a card. After a slow start, due to students being reticent to ask questions, a conversation sparked like wildfire. Most questions centered on the recent off-campus party with an attendance of 200 that led to the arrest of 60 students.

“We wanted students to have their voices heard, even if they were scared to tell their stories in front of everyone,” said Coidakis. “Having the anonymous question option available to everyone was our solution to this.”

Most students filled one side of the Great Room, with some still in their sports practice gear. Many questions were directed to the HPD Chief Matt French regarding what happened at the party on October 28th. Although there were allegations made that the Henniker police choose which parties they wanted to break up, French, as well as another officer who attended, Stephen Dennis, flatly denied those claims.

“We had planned to have this event weeks prior to the October 28th party but it was convenient timing that helped spark the discussion among students and community members,” explained Coidakis.

NEC Students asked questions and voiced concerns about actions that were taken and why. One NEC female student spoke about her ordeal the night of the arrest, stating that she spent three hours in the back of a police cruiser while needing to use the bathroom, resulting in her urinating in the back seat.

French denied that she was in the car that long and said, “the issue with taking a female to the bathroom is all of our officers on duty at that time were male. I am not going to put a male police officer into a position where he is taking a female off to use the bathroom somewhere.”

Green, who along with being a senior is an RA and Student Ambassador, understood how students felt.

“As a fellow student, I believe it is extremely important for our voices to be heard,” she said. “I want students at NEC to continue to voice their opinions and concerns when an opportunity, like this one, is handed to them”.

Although the Panel didn’t change what happened, it gave students the platform to express how they felt, something a lot of people would like to see more of from NEC.

McDowell expressed how much this event meant to the student body.

“I thought it was beneficial as a first step to closing that gap between the NEC community and HPD, but due to the incident that happened it gave people the confidence that they can come for answers to their questions or just in general to talk and speak their mind. If they didn’t feel like they could have done that they wouldn’t have been there”.

He continued, “From being on the panel, I can see the frustration that students have, and that is totally understandable. However, I hope that students take this panel and all that passion and never give up on their voice being heard.”

What is clear is that the student body was heard this night, and the panel discussion opened the door for The NewEnglander to host more panels about controversial topics important to the student body.

“I am glad that NEC is hosting events like this, this is needed,” said a Henniker Community member.