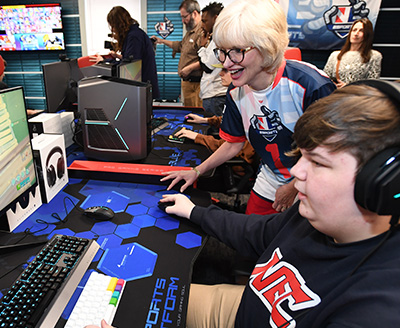 It looks like something from a movie set, but Henniker’s version of a Hollywood ending is just the beginning of a new blend of computer gaming and academic programs at New England College (NEC). The newly built Esports Arena is officially open for business. Creators of this advanced facility for students who are serious competitors in games like Fortnite and other live-action online games are confident it will be the centerpiece of a successful program on campus. Video gaming has been a popular activity for a long time, but esports is just now emerging as a competitive event at the collegiate level. NEC will be actively engaged from the start in this emerging field and organizers believe the school will quickly rise to the ranks of top programs in the country.

“Students learn through participating in competitive esports teams, the same skills and talents as other sports: leadership, communication, perseverance and determination,” explains Michele Perkins, President of New England College, who spearheaded development of the program. “Esports is closely connected to several of our school’s academic programs and this arena will be an exciting new platform for learning as well as a center for exciting competition.”

Esports coach Tyrelle Appleton told the crowd he has recently heard from ESPN and the NEC team will compete in the network’s opening qualifier for the Collegiate Esports Championship. “We are the premier gaming program in New England,” says Appleton. “We will happily accept all comers who want to challenge that statement, including our friends at SNHU. They may not know us now, but they soon will.”

NEC student Trent Lyon is one of the first to be recruited to play esports for the school. The Texas native has been competing regionally in Fortnite competitions where he has made a name for himself in the esports community. “I’m immensely excited to be one of the first players in this program,” says Lyon. “I’m a 21st century Pilgrim, ready to lead into new worlds.”

New England College is a member of the National Association of Collegiate Esports (NACE), the governing body for esports. NACE’s purpose is to promote the education and development of students through intercollegiate esports participation. Member institutions share a common commitment to high standards through participation in organized esports competition and serve as an integral part of the total educational process. Although not part of the College’s varsity sports program, students do learn through participating in competitive esports teams.

As part of the program, President Perkins is making scholarship aid available for students who meet academic standards for esports. Institutional scholarships ranging from $22,000 and up will be based largely on student grade point averages and academic achievements. This is a co-ed program, currently offered at the club sport level, which will be regulated by NACE.

Program administrators believe the arena will be a magnet for many who wish to pursue careers in game design, game theory, and other related programs in this fast-growing professional field. “There may have been a time in the recent past that parents would be wary of sending their kids to college to play video games, but the games have changed,” explains President Perkins. “These games provide links to good-paying jobs in high-tech fields all around the country. These are 21st century careers and we are thrilled to offer a unique new doorway to these professional pathways.”

President Perkins recognized two corporate sponsors, Xsplit and EsportsGear, for donations of equipment and training to launch the arena. The program is based on Alienware hardware, which is considered the top platform in esports gaming worldwide. There will be 20-40 students involved in esports on campus in its first year. NEC officials are confident enrollment in esports games and related programs will grow rapidly. “There are no limits,” says President Perkins.

An Optimistic Look at the New England Patriots’ 2020 Season