Wrestling is stupid. In fact, wrestling can be the most ridiculous, far fetched, over the top showcase in entertainment history. Sure there are companies like New Japan Pro Wrestling who try to stay sports based, but the majority of wrestling companies love to dig deep into the wonderful world of kayfabe.

For those of you who don’t know, kayfabe is the term used in Pro-Wrestling for the realm of wrestling that isn’t exactly true. For example, in kayfabe, Matt Hardy is able to open up a multiverse where different Matt Hardy’s from different universes can come out and fight.

Kayfabe is the silver lining between pro-wrestling being a real sport and it being “fake.” Sure, in the world of kayfabe you might be able to summon lightning from your fingertips, but as soon as you step into that ring, the athleticism is all but real. I mean, let’s be honest, how do you fake falling off a 20 foot cage or being suplexed into a barbed wire bed?

Nevertheless, the kayfabe aspect of wrestling is what i’m going to focus on here, because as I said earlier, wrestling is stupid. Over the years there have been many outlandish storylines that were just so ridiculous they didn’t manage to get it over with the crowd (over is a wrestling term for generating a positive reaction from the crowd.) Yet there have been some storylines that were just so stupid they actually managed to work. 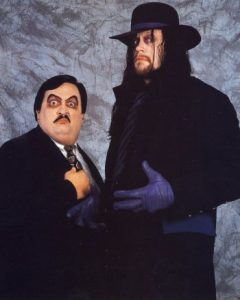 In 1990, Mark Callaway would change the landscape of Professional Wrestling as we knew it when he debuted in the WWF under the name “The Undertaker”. The character was an undead man with supernatural powers, accompanied to the ring by “Paul Bearer.” Now, you might think that you can’t possibly get more outlandish with a character like “The Undertaker,” but somehow the WWF managed to do just that.

Now, Taker spent his first few years growing into one of the biggest WWF superstars the company ever had, but it wasn’t until 1997 that the Undertaker’s lore was born and the character really came into its own. For months, Paul Bearer would appear on Monday Night RAW and blurt out the words “He’s alive Undertaker! Your brother Kane is alive!” but no one really knew who Kane was, what he looked like or what he was capable of.

The Undertaker was set to face the HeartBreak Kid Shawn Michaels for the WWF Championship in the first ever Hell in a Cell match. The two men would be locked inside a 20×20 steel cage enclosure, the point being that no mortal human could ever break into the cell and disrupt the match as Shawn Michaels’ partners Triple H and Chyna had a reputation of doing so.

However, during the match, the lights would go out, and being guided to the ring by Paul Bearer and balls of fire, Kane emerged from the entrance.

He made his way over to the cage, ripped off one of the cell walls with his bare hands and hit Undertaker with a tombstone piledriver, which happened to be The Undertaker’s own finishing move.

Kane was portrayed by Glenn Jacobs. Both Jacobs and Callaway were both staggeringly tall standing respectively at 7’0 and 6’10. Their height added to the gimmick; two supernatural beings that were massive in stature and muscle were facing off.

The legend continues on to reveal that Undertaker and his family lived in a funeral home for most their lives, until the Undertaker allegedly burned it down killing his mother, father, and presumably his brother Kane. However, Paul Bearer revealed that Kane made it out alive and he hid Kane in a mental asylum from his youth until his adulthood.

Kane and Paul Bearer would then set the casket on fire. 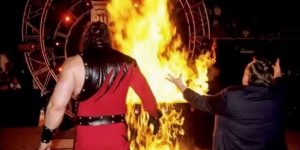 This action leads to the Undertaker revealing he’s spoken to the spirits of his dead parents and he’s decided to fight his brother. They would have their first match at Wrestlemania XIV.

For those of you who don’t know, an Inferno Match has only on one rule: set your opponent on fire. Yes, you read that correctly. The two men would enter the ring, which would then be surrounded by flames. Ultimately, The Undertaker would set Kane on fire and win the match. 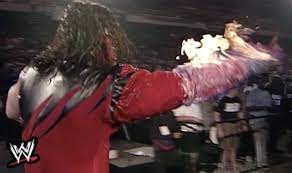 The story of The Brothers of Destruction is one of the most popular stories in wrestling history. This magical monstrosity somehow got through to the audience. To this day, The Undertaker is one of the most respected characters in the WWE. While Mark Callaway is now retired, his name still comes up in programming every now and then, and he is still mentioned throughout the wrestling community. Without a doubt, he has a Hall of Fame ring waiting for him.

Glenn Jacobs has also retired by now, and is now the mayor of Knoxville County, Tennessee. Why people thought a man whose entire career is based on the mystical lore of killing your parents was qualified enough to be mayor, beats me. 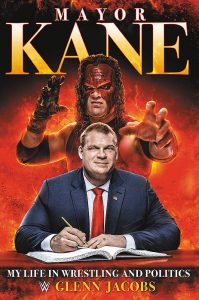 Looking back, I’m trying to understand how exactly this storyline actually worked. On paper, it’s ridiculous. Two magical, undead creatures that are brothers? Who share the murder of their parents in common? It’s dumb as hell.

The thing is, in execution, it was brilliant. It captivated the audience; the matches that came out of the story were brilliant, and in the end it cemented a legacy. For context, I didn’t start watching wrestling until 2004, a solid eight years after this storyline had ended. Yet, I became a huge fan of the Undertaker. Mark Callaway and Glenn Jacobs knew what they were doing when they began playing these characters.They were given crap, and they turned it into gold, which is very hard to do. Especially in professional wrestling.

In essence, wrestling can be absolutely, positively, unbelievably stupid. However, if executed in the correct manner, no matter how stupid the story or the characters, it’s going to get over.

The Brothers of Destruction are only one example of many stupid storylines and characters within the world of kayfabe and one of the only few that actually managed to work. In the end, it’s entertaining as hell. How in the world these two men actually managed to make any of this work will forever be a mystery to me and many others, but I will gladly go back and rewatch this feud without hesitation.