Last season, teams were in the middle of their conference championship tournaments when COVID-19 took its’ stranglehold and abruptly ended all live sports. The crushing news that March Madness was cancelled did not sit well with loyal college basketball fans. When the country locked down to fight the spread of the pandemic, fans normally would have had even more time to sink into their couches and watch every possible game. That’s what made the cancellation of March Madness all the more cruel.

Fast forward one year, to March 2021. The much-anticipated return of March Madness was upon us and I was ready to go. There was a bit of a scare early on as positive tests within #10 seed VCU’s program forced them to forfeit against #7 seed Oregon, but the rest of the tournament has gone off without a hitch. We have now gotten through the Elite 8 and only #1 Gonzaga, #1 Baylor, #2 Houston, and #11 UCLA remain. As the Final Four approaches this, let’s take a look at some of the finest games, players, and moments from this year’s tournament:

The First Four games aren’t usually remembered for their peak March Madness moments, but the long-awaited return of the tournament made these games very exciting. Joseph Yesufu’s massive fast-break jam was an excellent start to March Madness. Yesufu raced down the court after a steal on the other end, but a Wichita State defender got back and timed his jump perfectly. It didn’t matter. Yesufu threw down anyways. Check it out here:

Though they were knocked out in the second round, nobody can take away the defensive clinic Abilene Christian put on in the first round. As a #14 seed, nobody expected them to get past in-state rival Texas, a #3 seed in the tournament. Abilene Christian achieved the impossible; despite shooting a meager 29.9% from the field, he forced Texas to turn the ball over 22 times.

At the end of the game, Joe Pleasant was fouled with 1.2 seconds left and Abilene Christian was down one point. I was nervous for him, but he seemed to be just fine as he calmly sank both free throws to propel his team to victory. 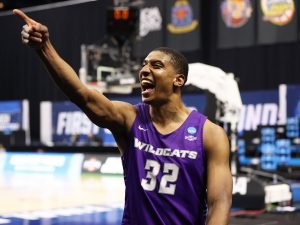 Led by the nation’s top scorer Max Abmas and forward Kevin Obanor, Oral Roberts grinded out two upset victories and made their way to the Sweet 16. They started off by beating Ohio State, which marked the first time since 2016 that a #15 seed beat a #2 seed. It has only happened nine times in the history of the tournament. They didn’t stop there. Their comeback win against #7 seed Florida marked the second time in history that a #15 advanced to the Sweet 16, joining Florida Gulf Coast’s 2013 squad. In the Sweet 16 against #3 seed Arkansas, Max Abmas came just inches away from hitting a game-winning three pointer, which would have made Oral Roberts the first #15 seed to reach the Elite 8 in tournament history.

There are a wide range of characteristics that can define someone as “athletic.” I would have a hard time describing what that criteria is, but all I know is that some people simply do not look like they would be Division 1 basketball players. Cameron Krutwig is one of those guys.

His stocky frame, mustache, and receding hairline isn’t exactly what comes to mind when someone thinks of peak athletic performance, but man, can he play. He was a freshman and key player during Loyola-Chicago’s 2018 Final Four run and quickly became the star of the team. This year, he helped Loyola-Chicago knock off #1 seed Illinois in dominant fashion, winning by 13 points. This strong two game run was aided by Sister Jean, Loyola-Chicago’s 101-year-old chaplain, who stole the show during their Final Four run in 2018. She made sure she was fully vaccinated by the time March Madness began this year so that she would be able to will her team to victory.

I’m a sucker for upsets and that’s the reason I watch March Madness. The early games are my favorite because that’s where the real magic happens. Gonzaga, the #1 overall seed in the tournament, is robbing me of upsets with every game they play. But at the same time, even though their games have been blowouts, it has been impressive to watch them dominate the tournament.

Three games remain until champion is crowned. We definitely have some exciting games to look forward to this weekend.

The biggest sports upset ever?