The women’s basketball team lost a hard-fought game, Feb. 26, against Mitchell College in the NECC championship game. The final score was 85-74, Mitchell.

Ericka Pratt led the charge with 22 points, and Asia Jones led the team in assists with 11. The team got everyone involved in good team basketball. They played solid but just fell short. 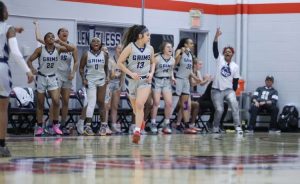 Overall, the team finished their season 18-8—just one win shy of continuing their season and playing in the NCAA division 3 season. Nonetheless, they had a successful season, with many great games. Only five seniors are graduating, so the core is still young. With the amount of talent on the team, they have a bright future ahead of them.

Through 26 games, the Grims averaged 61 points, 47 rebounds, and 11 assists per game. Although they fell short, winning that many games and making it to the NECC championship is a major accomplishment for these girls.