Another week in this natural disaster of a year has passed, and, of course, nothing has stopped. With our wonderful luck, 2020 also happens to be an election year. The upcoming presidential election has dominated the news cycle this week, mostly due to the fact that President Trump’s tax returns have resurfaced.

This week in 2020, we will take a look at all of the concerning words uttered by the President, and all the revelations that came with them.

But, before we dive into this week, here are some events that make my honorable mentions:

Moving on, things have been heating up with the Presidential elections just shy of a month away. On Tuesday, September 29th, 2020, the first Presidential debate is scheduled to take place, moderated by Chris Wallace, an anchor from Fox News.

With God as my witness, it’s going to take every single ounce of strength I have left to sit through the trainwreck this debate is bound to be.

Due to the nature of the President’s speeches, town halls, debates, and pretty much any other time he opens his mouth, we cannot possibly expect to get a solid answer from him. We can also expect there will be many insults and distasteful remarks, but most importantly, we can expect many embarrassed Americans as Trump continues to make America the joke of the world. 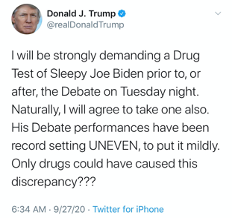 Ahead of this debate, President Trump has gone on another twitter rant, demanding that Biden take a drug test before their debate. He claimed that Biden’s “debate performances have been record setting uneven,” and that “only drugs could have caused this discrepancy.”

A classic attempt by Trump to discredit his opponent before a debate.

The Joe Biden campaign, as with most of Trump’s antics, have just dismissed the President’s remarks and clapped back with remarks of their own, saying “Vice President Biden intends to deliver his debate answers in words. If the President thinks his best case is made in urine, he can have it. We’d expect nothing less from Donald Trump, who pissed away the chance to protect the lives of 200,000 Americans when he didn’t make a plan to stop Covid-19”.

Certainly a bad look for the President who officially lost 200,000 lives due to the pandemic. What worsens his case is the fact that these remarks come mere days after President Trump stated that the virus “virtually affects no one” during one of his rallies in Ohio. To top that, the remarks come just two weeks after tapes were released of the President admitting he lied to the American people and downplayed the virus. It’s almost as if no one screws Trump as well as he does himself…

…no matter how much he pays them.

Along with Trump making a bigger fool of himself than Tucker Carlson ever wishes he could, the President once again began blurring the lines between a democracy and full on totalitarianism. Earlier in the week, Trump hashed out a plan that would involve putting an executive order in place to block Vice President Biden from winning the election if Trump were to lose. The president gave no insight into what the executive order would involve, how he would execute it, or even the legality of the idea itself.

Nevertheless, the President’s words get more and more concerning as we near November 3rd. The President has even admitted that if he were to lose, we can expect to not see a peaceful transfer of power, as we have seen in the last 200 years of this nation. In the event that Trump were to lose and decide not to leave, White House staffers held a meeting to discuss if this scenario were to arise.

If you need catharsis as much as I do, here’s a video of Trump’s encounter with Stone Cold Steve Austin in 2007:

On to more facepalms, audible sighs, and necessary phone calls to your therapist’s office, the cherry on top of President Trump’s antics this week were two major revelations: Cuba and taxes.

Official documents were leaked this week that brought proof to the claim that Trump tried to trademark his name in Cuba back in 2008. His plan was to not only erect a Trump Tower in Havana, he also wanted to open a golf course in Varadero. Plans for various casinos and beauty pageants were revealed as well. All this was to be conducted against the U.S. embargo against Cuba. So, not only was the President attempting to do business with an actual dictator, he was essentially attempting to break the law.

What else is new?

While we’re on the topic of Trump breaking the law, the second revelation of this week was the tax return leak to the New York Times. The Times acquired up to two decades of Trump’s tax return record, and to no one’s surprise, Trump has paid little to nothing.

On the bright side, at least the working class pays their fair share of taxes so the President can golf! But, the release of Trump’s taxes weren’t exactly shocking. There was a reason he fought so hard to keep them a secret and everyone could’ve speculated that Trump, being one of the richest people on earth, wasn’t paying up.

Regardless, bringing it to light not only confirmed Trump was committing tax fraud, but added to the list of many crimes Trump has committed both in office and prior. A list so long I might not be able to fit it all on one page, but we’ll try.

As of right now, Trump has been accused of, involved in, or proven to have:

The list goes on and on, and yet many Americans refuse to acknowledge that Donald Trump is a criminal.

Many are willingly ignoring the disgusting actions of the President and plan on voting for him again. It’s Trump vs democracy, the nation vs a criminal. Many fear a second term and the possibility of him going full-facist.

There has never been a more important time to vote.

The more we press people to cast their vote, the higher the chance we have at saving our democracy. Joe Biden may not be our first choice, but he’s the only one we’ve got. As Senator Bernie Sanders said earlier this week, “This is not just an election between Donald Trump and Joe Biden, this is an election between Donald Trump and democracy, and democracy must win.”

It’s Trump vs democracy, the nation vs a criminal.

If you haven’t yet, register. Request a mail-in ballot, go out to the polls, vote. This is the most important election in the history of the United States and the very backbone of our nation is at stake.

If you need more information on how to register, click the link below:

And if you need a reason to vote check out this video:

Painted in a Different Light