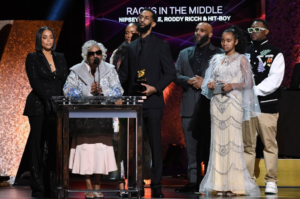 Nipsey was a leader that the black community looked up to. He stood for change in life, and motivated people to keep the marathon going. He focused on giving solutions and inspiring all young black people like him. He denounced gun violence in his music, expressing his emotions on his days in gang culture. For a man like him, to have all that pain held in disguise, he used it toward his success and wanted to give back to the world.

He opened his clothing store on June 17th 2017, wanting to invest and provide opportunities in his neighborhood of Hyde park; this shows what type of character Hussle was, and how he wanted people to carry themselves in this world. Before his death on March 31st, he contacted officials from the LAPD to arrange a meeting with him about what they could do to prevent gang violence in South Los Angeles, this meeting would took place in April 1st. Nipsey represented hope for any community in America to strive to do better in life; I know something about trying to be better, searching for a way out to show your people a better way in life than the one they were labeled to be.

One thing’s for sure, Nipsey Hussle’s legacy goes on to this day, as we must have the marathon continue in the memory of him, to keep doing what we do best: hustle, motivate, and live for our communities we are in right now.

Netflix’s “Crime Scene: The Vanishing at the Cecil Hotel” Review

“Rap is Poetry”: My Love For Hip-Hop